Summertime and the Cooking is Easy


Summer has begun and the Fourth of July is almost here. With some of the hot days we’ve had, you might have run through your arsenal of grilled meats and pasta salads and be looking for something new. Or maybe you have a family picnic or barbecue with friends coming up, and you’d like to find an interesting dish to bring. The library has several new cookbooks you can borrow to find some new, unique recipes. 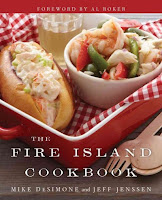 The Fire Island Cookbook, by Mike DeSimone and Jeff Jenssen, is an entertaining-focused cookbook with complete menus intended for each weekend from Memorial Day through Labor Day. The authors designed the recipes to include seasonal produce. Some of the menus can be prepped early in the day before the hosts leave for the day, say for the beach, with last-minute things to be grilled when guests arrive in the evening. Others are very elaborate for those who love gourmet cooking. All include wine suggestions. 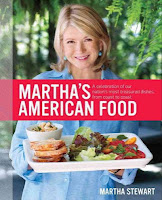 Martha’s American Food is Martha Stewart’s latest offering, called a “love letter to American food” by the publisher. It’s divided into sections by region, plus a section called “all-American” which includes basics like blueberry pancakes, mashed potatoes, and three-bean salad. The Midwest section features some regional products, like wild rice and corn, and some regional ethnicities, with recipes like sauerbraten and lingonberry punch. Never fear, Martha did remember to include a hotdish recipe.

Food Network fans may want to borrow Weeknights with Giada, by Giada De Laurentiis. This cookbook focuses on suppers that are quick to make – some in 15 minutes or less. I don’t know about you, but I take longer than that just to chop things. Quick cooking times certainly help keep the kitchen cooler, though. Giada includes breakfast-for-dinner recipes, meatless Monday vegetarian recipes, sandwiches, and hearty salads. 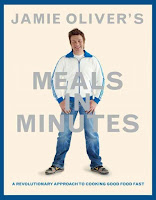 Another cookbook with quick recipes is Jamie Oliver’s Meals in Minutes. Jamie says that you can organize your kitchen for faster cooking and learn techniques that speed it up, as well. He gives complete menus with instructions listed in order of preparation to help you get the meal done as quickly as possible. I think I could use a cookbook that tells me to start cooking this first, switch over to that, and remember to go back and do something more to that first thing, especially when managing more than one new recipe.

Baking may not be at the top of your mind in the summer, but the cover of Cake Boy by Eric Lanlard features a berry-topped cake that looks perfect for this time of year. The cookbook goes beyond cakes to include recipes for macaroons, Key lime pie cheesecake, and rhubarb and apple tart, all of it with gorgeous photos. 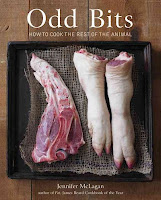 The photo of raw pigs’ feet on the cover of Odd Bits: How to Cook the Rest of the Animal, by Jennifer McLagan, is not so pretty, but most of the photos inside look delicious. This cookbook captures the trend of cooking the whole animal, nose to tail, which is actually a return to traditional practices of making good use of resources. The book explains the history of eating the most economical cuts of meat and why and how we have come to avoid them in the modern world. The recipes include things that are not at all troubling, such as Brisket Braised with Carmelized Onions and Chile, and things that would give most of us pause, such as Minted Tripe & Pea Salad. Foodies who enjoy meat, this book is for you.

Our library offers a broad variety of cookbooks, traditional and trendy, to help you find new recipes – or just have fun looking at pictures of food. Have a great Fourth of July, and happy cooking!