Do you check out movies and audiobooks at the library?  Now you can keep them longer!  Pioneerland Library System has lengthened checkout times on these materials.

Videos are now due back one week after they are checked out instead of five days.  This will allow people who only come to town once a week, or those who come to storyhour at the library once a week, to make use of our movies.  It also makes sense now that we offer many seasons of television shows on DVD; most people need a little more time to watch those.

You may still have six DVDs checked out on a library card at one time.  To check out more, you’ll need to return some.  Fines for late movies are $1 per day with no grace period, up to a maximum late fee of $3 per movie.

Audiobooks are now due back 4 weeks after they’re checked out, the same as print books.  Most people don’t get through a book any faster by listening to it than by picking it up and reading it, so I think many of our audiobook users will like this change.  People who are going on road trips often use our audiobooks, and many times they need longer than our previous 2-week checkout period.  We thought about how people use this format and the library system made this change to better serve your needs.

So what will you check out with these new longer checkout times?  Here are a few ideas from among our new audiovisual offerings:

The Book of Negroes is a new miniseries from the Canadian Broadcasting Corporation. It tells the story of a woman kidnapped from Africa and sold into slavery in South Carolina.  She escapes during the American Revolution and makes her way to New York and other places in pursuit of freedom.  Reviews say it’s difficult but extremely compelling to watch.  The series is based on the book “Someone Knows My Name” by Lawrence Hill, also published under the title “The Book of Negroes.”

Grantchester is the new BBC miniseries that was broadcast on PBS after Downton Abbey this year.  This gentle mystery series features young vicar Sidney Chambers and an overworked inspector solving crimes in an English village.  It features a diverse group of characters and the high quality writing and cinematography we’ve come to expect from British television.  This series is based on the mystery book series by James Runcie. 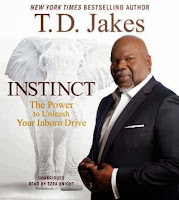 On the audiobook front, we have T.D. Jakes’ Instinct: The Power to Unleash Your Inborn Drive.  The author focuses on discovering one’s natural aptitudes and applying lessons learned from past experiences. Jakes is the senior pastor of the nondenominational megachurch The Potter’s House in Dallas, and a producer of the movie “Heaven is for Real.” 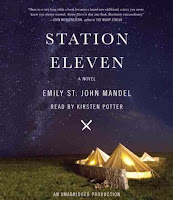 We also have the audio version of Station Eleven by Emily St. John Mandel.  This post-apocalyptic novel was a finalist for the 2014 National Book Award.  Rather than focusing only on crisis like most novels of this genre, this one follows a troupe of actors and musicians who travel between communities after a pandemic, living by the Star Trek quote, “Because survival is insufficient.”

Libraries are full of stories.  You can find them on the pages of books, but you can also find them on CDs and DVDs.   Come in and explore all of our different kinds of materials and bring home a story you’ll enjoy.
Posted by Litchfield Public Library at 4:40 PM