When I think about author Richard Paul Evans, I think of books such as “The Walk,” or “Miles to Go,” or“The Christmas Box.”  However, he also writes a young adult series in a very different genre. “ Michael Vey: Storm of Lightning” is the fifth in a series of  books about a boy with amazing electrical powers.  These books are very popular, especially with boys who enjoy reading about strong characters who experience lots of action. 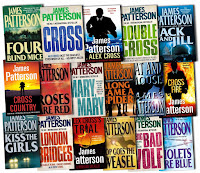 When I think about the author James Patterson, series such as the “Alex Cross” novels or “Women’s Murder Club” mysteries come to mind.  He has also published  popular young adult and juvenile books: the “Maximum Ride” series, “Witch and Wizard” series, the “Middle School” series,  The “I Funny” series, and others.  I really don’t know how he does it.  He has also introduced a series about a treasure-hunting family, the Kidds, who have incredible adventures.  The books in the series are “Treasure Hunters,”  “Treasure Hunters: Danger Down the Nile,”  and “Treasure Hunters: Secret of the Forbidden City.”  They are highly illustrated in black and white, full of silly jokes and plot twists.  This is a fun one! 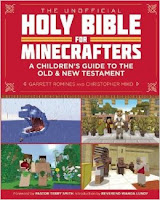 When I think about the Bible, I think about, well, the Bible, the Jewish and Christian Scriptures.  We just received a most interesting version, “The Unofficial Holy Bible for Minecrafters.”     I have never played “Minecraft,” a video game that is popular world-wide, but I’ve seen young gamers fascinated by it.   "The Unofficial Holy Bible for Minecrafters" is a respectful re-telling of well-known Bible stories with illustrations straight from the world of “Minecraft.”  I wasn’t sure we needed this, but we have it and I think fans of “Minecraft” will love it. 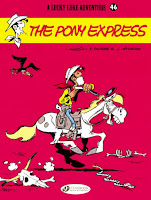 Finally, I don’t know what to say about a series of graphic novels I added to the library collection because of a request from a young person.    I didn’t look into “Lucky Luke” very thoroughly, not a good idea.  The books present a funny look at the Wild West in the USA as envisioned by the     cartoonist, Maurice De Bevere, better known as Morris.  Morris worked with Harvey Kurtzman, Jack Davis, and Wally Wood, all of “Mad Magazine.”  “Mad Magazine” has been an equal opportunity offender since 1952, so it might be expected that the series is part tribute to the mythic American west, part parody, and full of western stereotypes.  The “Lucky Luke” series is a Belgian comic book originally written in French, later translated into English and published in Great Britain.  Lucky Luke is “the man who shoots faster than his own shadow.”

Here is my problem with “western” stereotypes.  I’ve been weeding the collection to get rid of books that give an inaccurate view of Native Americans, not in an effort to be “politically correct,” but in an effort to bring the collection up-to-date and to portray other cultures fairly.  The “Lucky Luke” comics bring the 1970’s stereotypes roaring back!  However, somehow I’m not as offended when he takes on the French Canadians in “The Beautiful Province.”  So much for fairness. 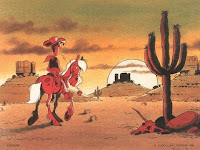 Get hooked on a series.  You’ll be glad you did.
Posted by Litchfield Public Library at 11:46 AM