I read in the Star Tribune that one of the presidential hopefuls thinks that the Internet should and could be shut down.  I don’t think this is a good idea, doubt if it could be done, and wonder if it’s even legal.  But this led me to the thought of worldwide cyber domination.  I’ve never typed that before!  James Dashner, the author of “The Maze Runner” series and “The 13th Reality” series, has released the conclusion to “The Mortality Doctrine” series, “The Game of Lives.”  This series explores the world of virtual reality games, which sometimes seem more real to the gamers than their real lives.  In this series, the difference between reality and virtual reality has become blurred and the virtual reality world is now dangerous.  If the villain succeeds, he will indeed achieve worldwide cyber domination.   Reviewers compare this book to the movies “The Matrix” and “Inception.”

In 1863, Charles Kingsley wrote “The Water Babies,” a very odd little book about children who evolve into tiny undersea creatures that share a magical world of fairies, insects, and water nymphs.   Reverend Kingsley was a friend of Charles Darwin and supported Darwin’s ideas in his writing.  He also was very concerned about the necessity of adequate shelter and clean water, and the abuse of children made him furious.   The new version we purchased is a reprint from an abridged version from 1915, and the illustrations were made by Mabel Lucie Attwell.  Like “Alice in Wonderland,” this children’s classic deserves to be read by a new generation.

Andy Griffith was an actor known for playing congenial roles, but when he played a villain, he seemed especially deadly.  Eve Bunting is famous for her wonderful picture books, but when she writes a ghost story it’s a doozy.  “Forbidden” is great historical fiction, set in an area infamous for shipwrecks that never had survivors.  The ghost story is believable with just the right touch of forbidden love.  I would like to sit in a cozy chair and read this while the wind howls outside.

“5-Minute Fancy Nancy Stories” by Jane O'Connor, is a different kind of cozy read.  Twelve stories about Fancy Nancy are included in this perfect-for-bedtime storybook.  Each story can be read aloud in about five minutes, although it wouldn’t surprise me if Nancy’s fans would demand an hour’s worth.   The book even includes a list of fancy words that are used in the book. 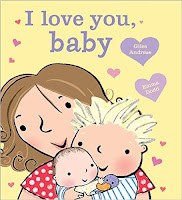 The arrival of a new baby is a huge event in children’s lives.  My philosophy is that you can’t have too many books about bringing that new baby home.  “I Love You, Baby,” by Giles Andreas, is a sunny, joyful look at   family life. Sibling rivalry doesn’t show up in this one.

Have a joyful new year!