Today I want to tell you about some Interesting new young adult books. One is the beginning of a new series, one is in the middle, and two titles conclude their series.

The Four Horsemen found in the chapter six of the book of Revelation in the Bible make an appearance in “Riders,” by Veronica Rossi. War, Conquest, Famine and Death, along with their horses, join together to try to save humanity from an ancient evil. Watch for other books by Veronica Rossi, because this one feels like the beginning of a series. 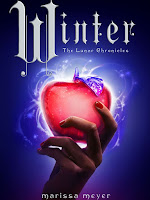 “Winter,” by Marissa Meyer is the final book in the series, “The Lunar Chronicles.” The books in this series are “Cinder,” “Scarlet,” “Cress,” and “Winter,” along with short story collections, “Fairest,” and “Stars Above.” The books are based on the fairy tales of Cinderella, Little Red Riding Hood, Rapunzel, and Snow White. The collections of short stories fill in details and back stories of various characters. This series is an interesting combination of familiar fairy tales and futuristic technology and adventure.

Sometimes I accidentally get the final book in a trilogy first. “Hawking’s Hallway,” by Neal Shusterman and Eric Elfman, concludes the “Accelerati Trilogy.” The first two books, “Tesla’s Attic,” and “Edison’s Alley” are on order and should be here any day. Science meets quirky characters in this trilogy which has the feel of the “Back to the Future” movies.

Some time ago, we added the “Dorothy Must Die” books to the library system. Danielle Paige’s imaginative re-telling of the Oz stories created quite a stir when they first came out. The third book in the series, “The Yellow Brick War” is due out in March. Meanwhile, “Dorothy Must Die Stories Volume 2,” helps fill in some of the gaps. These are called prequel novellas, longer than short stories and shorter than the novels. Danielle Paige isn’t afraid to turn the characters of the familiar Oz stories upside down, making Dorothy a ruthless dictator. Amy Gumm, an ordinary girl from Kansas, is sent to undo the Wizard’s magic and free the Land of Oz.

The pile of new books on my desk also includes two books by one of the most-challenged authors in America, Judy Blume. The titles are “It’s Not the End of the World,” and “Are You There God? It’s Me, Margaret.” These copies replace worn out copies of these beloved books. As I skimmed through them, I was struck by how well these titles have stood the test of time. I usually don’t buy books originally published in 1970, but these books really are a special case. Judy Blume’s gift for capturing what teens feel and think is still remarkable.


Revisit a book you read as a teenager, or pick up one of these challenging, unusual YA titles. You’ll be happy you did.

Posted by Litchfield Public Library at 11:03 AM