Books for a Hot Summer Day

These long days of June are my favorite part of summer.   The library feels like a busy, vibrant place.   More than 260 young people ages 2 through 16 are participating in summer reading, but there is still plenty of time to sign up and start playing the summer reading game.

Erin Hunter wrote the six books in Survivors, a series about dogs surviving the end of human civilization .  Hunter’s new series is called “Survivors: The Gathering Darkness.”  The first book is titled A Pack Divided and the title of the second book is Dead of Night.  Expect more tension and a lot of action in this one.   I don’t think my dogs would last long if we disappeared, but it’s nice to think they could join a pack and survive.   The back cover of Dead of Night states, “In a pack, loyalty is everything – but some dogs should never be trusted.”

Another book cover asks, “In a game of lies, who can you trust?”  The title of the book is The Long Game, by Jennifer  Lynn Barnes.   This is the second novel in the “Fixer” series.    The fixers are a family named Kendricks who help make the problems of the Washington elite disappear.  This thriller is written by a very qualified author.  Jennifer Lynn Barnes has advanced degrees in psychology, psychiatry, and cognitive science and writes a believable political thriller.

The Notorious Pagan Jones is a work of fiction that reads like headlines about some of the young self-destructing actresses in Hollywood.

Nina Berry set her story in the 1960’s, with a young actress killing her entire family in a car accident.  She is released from jail and sent to Berlin to make a movie which is only a cover for herinvolvement with the CIA.  Interesting twists and turns make this a political thriller set in a turbulent time in Germany.

Karen Cushman was a Newbery Medalist for The Midwife’s Apprentice and knows how to tell a good story.  In Grayling’s Song our heroine must free all of the magic makers in the kingdom from a powerful curse.  Ms. Cushman stated that while she enjoys writing historical fiction, she wanted to set a book in a place like medieval England, but with magic. 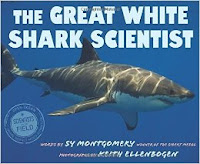 Finally, a noted nonfiction author, Sy Montgomery, brings us The Great White Shark Scientist.  The scientist profiled in this book is Greg Skomal, and he does what I could never do.  He is an expert on shark biology.  This book is filled with wonderful photographs both above and under the water.  Many children tell me that they want to be marine biologists, an odd vocation for someone from the Midwest.  This lovely book might just inspire some more would-be young scientists.

These books, and more, are waiting for you at Litchfield Public Library.

Posted by Litchfield Public Library at 11:06 AM