“Do you know the difference between Google and librarians?  Librarians are search engines with a heart!”    I like this joke from “I Funny: School of Laughs.”  James Patterson and Chris Grabenstein collaborate on the “I Funny” series.  Our hero, Jamie Grimm, famous for being on tv and for winning a national comedy contest, has taken on  the task of helping the school librarian save the school library.  He does it by teaching his classmates how to be funny.  Can you learn to be funny if you don’t have a funny bone?  I don’t know. I think we’re born with a sense of humor and either have one or not.

Anyway, this is a good example of a novel that is heavily illustrated but not quite a graphic novel.  I don’t know who started this trend.  Jeff Kinney’s
series, “Diary of a Wimpy Kid,” uses the same format of small amounts of text with many illustrations that move the story along.  The eleventh book in the series, “Double Down,” came out in November of 2016.  Our copy of this popular book is checked out, which is an indication of how much these books are liked.

“Hamster-saurus Rex,” by Tom O’Donnell, is another example of a book that combines text with many illustrations.   A cute little hamster shows up in a classroom in grade 6.  One unusual thing about this hamster is that he’s
fearless and he growls.  Another unusual thing is that no one seems to know where he came from.

Dave Pilkey’s new series, “Dog Man” is more of a true graphic novel.  It’s a very funny series.  Greg the K-9 officer and his partner are injured, and after extensive surgery, become an officer with the head of a dog and body of a man.  These fly off the shelves, in spite of the twisted premise.

Tom Angleberger has published a new book, Rocket and Groot: Keep on Truckin’.  Rocket and Groot are from the universe of Marvel’s Guardians of the Galaxy.  The blurb on the back of the book says that Rocket and Groot, with their super-intelligent tape dispenser, Veronica, have crash landed on a world called HappyHappyFunFun.  “This is a happy place, except for the out-of-control self-driving monster trucks, a supercomputer called Big Mama, and sharks, lots of sharks.”  I don’t get it, but that doesn’t matter. The first Rocket and Groot adventure, “Stranded on Planet Strip Mall,” has been very popular.  Just in case you wonder, Rocket is some kind of space traveling raccoon, and Groot is some sort of tree creature.  I just don't get "Guardians of the Galaxy." 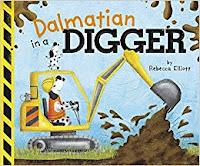 Librarians are usually not thought of as people with a sense of humor.  Still, funny things happen at  libraries every day.  This morning at story hour, we shared a book called “Dalmatian in a Digger,” by Rebecca Elliott.  The whole point of the book was alliteration, with a duck in a dump truck and a camel in a crane.  But a little expert on heavy machinery corrected me: it was a Dalmatian in an excavator!