How I Spent my Summer Vacation

By Jan Pease
Those of you who have facebook can click on this link and see our favorite spot.
https://www.facebook.com/beautifulnorthshore/videos/1852324971449915/ As many of you know, we like to get away “Up North” and spend some time looking at Lake Superior and reading a lot of books. So this is the annual “what I read on my vacation” article.

My husband Dave is working hard to get our house painted before the snow flies. This year our vacation turned into a staycation.

I read a lot.  Some of it was very good.  Some of it was truly embarrassing.  One of the best books I’m still reading is “The Benedict Option: a Strategy for Christians in a Post-Christian Nation,” by Rod Dreher.  Mr. Dreher calls attention to the way our culture erodes the family and the church.  He
foresees a coming  dark age nearly as bad as the one in Europe during and after the fall of the Roman Empire.  The  book is an interesting, controversial read, and definitely makes you think.  Reviews at Amazon.com range from “awful” to “vital.”

I discovered Ann Aguirre, a young adult author and her trilogy, “Razorland.”  The titles are “Enclave,” “Outpost,” and “Horde.” Ms. Aguirre does a good job of world-building her post-apocalyptic societies in and around   New York City, which is in ruins.  There are tunnel denizens, various races, and isolated communities who live in walled villages, all faced by an implacable cannibalistic enemy.

I also read “When the English Fall,” by David Williams.  This is another post-apocalyptic novel, told from the point of view of an Amish farmer. The world of the outsiders, called “The English” collapses after a massive solar storm.  The Amish aren’t affected at first by the loss of electricity and the internet and all of the amenities of modern life, but gradually their peaceful world is invaded by desperate people willing to kill just for the sake of killing.  I really enjoyed this book, and hope that Mr. Williams continues the story of a peaceful family surviving in a terrible world. 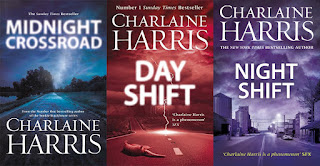 Because so many people read Charlaine Harris, and because I watched a summer  tv show called “Midnight, Texas” based on her books, I finally read Ms. Harris.  Four of her books! I read “Midnight Crossroad,” “Day Shift,” and “Night Shift,” as well as the first Sookie Stackhouse book, “Dead until Dark.” They are too silly, and have too much romance, and too many vampires, were-tigers, demons, and fallen angels for me. I hope this doesn’t offend any of her fans, but these four and no more.

Jo Nesbo is a Norwegian author who is very popular in our area.  He has been on my list of “to be read” also known as TBR for quite awhile.  I finished the first Harry Hole novel, “The Bat” and thoroughly enjoyed it. Even though I’m not on vacation now, I’m looking forward to reading “Cockroaches,” the second Harry Hole book.

“The Girl in the Spider’s Web” continued the story of Lisbeth Salander that started with “The Girl with the Dragon Tattoo” by the late Stieg Larsson.

David Lagercrantz  is writing the series, now renamed “Stieg Larsson’s  Millennium Series.”  The first time I tried reading “The Girl in the Spider’s Web,” I just couldn’t deal with the difference in style, even though Mr. Lagercrantz writes a lot like Mr. Larsson.  But now it’s been long enough since I read the first books, and I’m enjoying getting reacquainted with this Swedish series.

See you at the library!
Posted by Litchfield Public Library at 2:09 PM