Don't Know Much About History

George Santayana said, “Those who cannot remember the past are condemned to repeat it.”  Authors are always coming out with new books about history to teach us about the past, and our library has a number of recently-published choices.

Starting way back in 247 B.C., Patrick N. Hunt’s biography Hannibal gives readers an opportunity to learn about one of the great generals of the ancient world.  Hannibal Barca of Carthage (which is now Tunisia) crossed the Alps with war elephants to invade Italy.  It’s a little hard to imagine!  Hannibal’s tactics are still taught in military academies, and generals from Napoleon to Norman Schwarzkopf have studied and admired him.

Moving ahead just over two thousand years, another recently-published book covers the experiences of the first American women in the Army.  The Hello Girls: America’s First Women Soldiers by Elizabeth Cobbs Hoffman tells the story of the women who served in the Army’s Signal Corps in World War I.  General Pershing needed experts to run telephone switchboards to keep the commanders in touch with the troops under fire, and women were the experts in this new technology. The Hello Girls faced many kinds of challenges in the war zone, sometimes serving directly on battlefields.  When they were discharged after the war, they received no veterans’ benefits until a handful of survivors finally won those in 1979.

The book Istanbul: A Tale of Three Cities covers a massive range of history and prehistory, from 800,000 BC to the present.  British historian and TV documentary producer Bettany Hughes has written what some are calling a biography of the city that has been named Byzantium, Constantinople, and Istanbul.  It has been the capital city of the Roman, Byzantine, and Ottoman Empires and for a long time was the most important city in the world.  Hughes writes with an enthusiastic narrative style, full of details and drama. 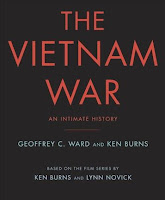 Ken Burns is America’s favorite TV documentary-maker.  His new one is The Vietnam War, which we will be getting on DVD for the library.  The companion book is The Vietnam War: An Intimate History, co-authored with Geoffrey C. Ward.  Full of photographs, this book gives as comprehensive a look at this controversial war as you are likely to find, from its causes to its legacy.

For a fresh look at the Revolutionary War, check out Scars of Independence: America’s Violent Birth by Holger Hoock.  The publisher’s description of the book says, “The American Revolution is often portrayed as an orderly, restrained rebellion, with brave patriots defending their noble ideals against an oppressive empire.”  The author sets aside the usual nostalgia to examine the brutal violence that both sides engaged in, including the torture of Loyalists, the rape of colonial women, the starvation of prisoners, and the genocidal campaign against the Iroquois.

Other new books about historical topics include Stanton: Lincoln’s War Secretary by Walter Stahr, Ike and McCarthy: Dwight Eisenhower’s Secret Campaign Against Joseph McCarthy by David A. Nichols, and The Kelloggs: The Battling Brothers of Battle Creek by Howard Markel.  Learn more about history by picking up a book about a time or topic that’s new to you.
Posted by Litchfield Public Library at 2:54 PM