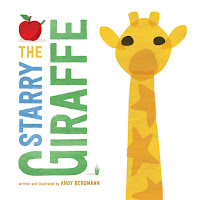 I’m writing after story time on Friday.  More boys than girls came today, and they were so much fun.  Our story, “The Starry Giraffe,” featured an apple-picking giraffe who shares her apples with everyone, including a tiny green inch worm.  So we made apples by gluing tissue paper on an apple outline, and added little green pompoms and eyes to finish out the picture by adding an inchworm or caterpillar.  It was a fun book and project.

I’ve been buying nonfiction juvenile books again.  They tend to be bright and colorful, with not much text but wonderful pictures.  Watch for books about North American animals and birds, as well as some great math concept books.

It’s almost Christmas, so the books that make great gifts are arriving.  One, by the famous author of  “The Book Thief,” Markus Zusak, is titled “Bridge of Clay.”  This book is long: 544 pages and the print isn’t large.  My first thought on skimming through the book was that this is pushing the YA label.  This story of five brothers raising themselves is receiving remarkable reviews.    I visited Mr. Zusak’s website and looked through the book, but I’ll have to read it to really understand it.

Cressida Cowell is known for her “How to Train Your Dragon” series, but she has started a new series that looks like a winner, “The Wizards of Once.”  Ms. Cowell writes and illustrates her books which many writers wish they could manage, but seldom do.   The second book in the series, “Twice Magic,” continues the story of a boy wizard named Xar and a fierce girl warrior named Wish who live in a world of danger and magic.  As I skimmed the book, I fell in love with the talking lynxes  and a spoon that pretends to be dead.

Kathryn Lasky became a New York Times bestselling author with her “Guardians of Ga’Hoole” series.  Now she’s writing an epic animal fantasy,  “Bears of the Ice.”   The first book was “Quest of the Cubs,” and now “The Den of Forever Frost” has been published.  Can Ms. Lasky do for polar bears what she did for owls, wolves, and horses? (She also wrote the “Wolves of Beyond” and “Horses of the Dawn” series.)

James Patterson and Chris Grabenstein have been friends for many years and have collaborated on several books, “Treasure Hunters,” “I Funny” and “House of Robots.  I suspect that Mr. Patterson comes up with plots and Mr. Grabenstein adds hilarious characters, dialogue, and action. “Max Einstein: The Genius Experiment,” reminds me of “The Mysterious Benedict Society, by Trenton Lee  Stewart, but with more humor.    A group of super intelligent kids is recruited to help a mysterious, but “good guy” organization  solve the world’s problems using science.    Of course, there also mysterious, evil bad guys to contend with.  What would Albert Einstein do? 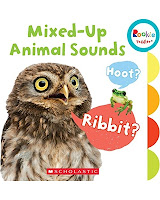 Finally, I have to mention some of the cutest board books ever seen, the Rookie Toddler board books from Scholastic.  These colorful little books each have a theme, such as “Listen to the Rain,” or “Mixed Up Animal Sounds.”   Each book also has an animal or toy hidden on the sturdy pages, as well as story time tips for parents.  I love these little books!  See you at the library!