Thanksgiving Movies at the Library

“Come, ye thankful people, come, Raise the song of harvest-home; All is safely gathered in, Ere the winter storms begin.”  This Thanksgiving hymn by Henry Alford was written in 1844, but here in rural Minnesota we still understand the importance of bringing in the harvest before winter begins.  My neighbors were working hard at that in the little bit of warm weather we had lately.

The Litchfield Library, along with all Pioneerland libraries, will be closed on Thursday for Thanksgiving.  We’ll be open normal hours the rest of the week.  As you gather with family and friends, or as you have a quiet day at home, perhaps you’d like to have a Thanksgiving movie on hand to watch after you’re done eating turkey.  There are a number of movies in the Litchfield Library collection that have some connection to the holiday.

A Charlie Brown Thanksgiving is the obvious choice if you have children in the house.  Not as good as A Charlie Brown Christmas or It’s the Great Pumpkin, Charlie Brown, this 25-minute TV special from 1973 is still fun.  Charlie Brown has a predicament: what to do when his pushy friend Peppermint Patty invites herself and others to his house for Thanksgiving dinner, even though his family is going to be leaving for his grandmother’s house?  Snoopy saves the day with an assortment of snacks served on the ping-pong table.  To be like Charlie Brown, my family usually eats popcorn, pretzels, toast, and jelly beans on Thanksgiving night, a tradition we started when my kids were little. 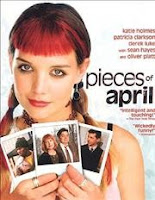 Intended for a bit older audience than Charlie Brown, Pieces of April is a 2003 movie about a free-spirited 21-year-old attempting to make Thanksgiving dinner for her estranged family.  Her parents, siblings, and grandma drive to New York City from suburban Pennsylvania while April discovers her oven doesn’t work, and she turns to her eccentric neighbors for help.  Katie Holmes stars in this comedy about family dysfunction; critics say it’s endearing, if a little edgy.

Holiday Inn is one of those 1940s classics: Bing Crosby, Fred Astaire, and music by Irving Berlin.  A couple of friends who have left show business run an inn that is open only on holidays – a perfect vehicle for a movie full of holiday-themed musical numbers.  There is a Thanksgiving holiday in the movie, and the Christmas scenes include the song “White Christmas,” so you can start to get in that holiday spirit, as well.

Paul Blart: Mall Cop isn’t a favorite of movie critics, but you might get some laughs out of it anyway.  Kevin James stars in a story about a New Jersey security guard who defends a mall from a group of organized criminals who take shoppers hostage on Black Friday.

Do you watch the Macy’s Thanksgiving Day Parade on Thanksgiving morning?  The movie Miracle on 34th Street begins with the parade, where the actor playing Santa is discovered to be drunk and is switched with a very popular replacement.  The replacement is then hired to work as Santa in the store, but things take a turn when he claims to be the real Santa Claus.  The 1947 version, starring Maureen O’Hara and Natalie Wood, won three Oscars.

I am thankful for all of the library users and supporters in our area who help make our library a hub of the community. I wish you and yours a peaceful and bountiful Thanksgiving Day.