Another Day that will Live in Infamy

When you see the date, “September 11,” does a chill run down your spine?  I remember coming to work that day having just heard that America was under attack, including Minneapolis.  We quickly looked at the news on the Internet, a new thing back then, and discovered that Minneapolis was fine, but that the east coast was in turmoil.  A book salesman was visiting the library whose brother worked at the Pentagon. What a day.  Anyone who was alive back then probably can still recount what they were doing when they realized the magnitude of the attack.  2001 was 18 years ago. According to the U.S. Census Bureau, an estimated 28.5% of Americans are under 18.  So what do we tell them, especially if they’re children?

Here is a list of books that explore this day in our history.

“The September 11 Attacks Transform America,” by Whitney Sanderson, published in 2018 by The   This nonfiction book is part of the “Events that Changed America” series.
Child’s World, is a book with a lot of information in only 32 pages. 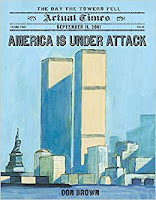 “America is Under Attack,” by Don Brown, was published in 2011 by Roaring Brook Press.  This book is designed for very young children, but has great information.  Don Brown is a well-known author of books for young children that delve into history. 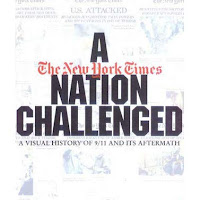 “A Nation Challenged: a Visual History of 9/11 and Its Aftermath,” staff at the New York Times and published by Scholastic in 2002 as a young reader’s edition.  This book is shelved in the adult area (973.931).  Reviews of the book are mixed.  The photography and text in the first part of the book are described as spectacular, but the second half of the book shows a bias against American involvement in Afghanistan.

Sometimes fiction books can help a reader process a tragic event.  “I Survived the Attacks of September 11, 2001,” by Lauren Tarshish, is part of the very popular “I Survived” series.  In this book, a boy skips school and rides the train into New York City to visit one of his dad’s friends, a  firefighter.  Just as he reaches the fire station, the planes crash into the twin towers.    Ms. Tarshish thinks and writes about famous disasters, and her books just fly off the shelves.

“Nine, Ten: a September 11 Story,” by Nora Raleigh Baskin, looks at the days just before September 11, and how the disaster changes the lives of four young people in different parts of the U.S.

Finally, “Truthers,” by Geoffrey Girard, examines conspiracy theories inspired by 9/11.  For an interesting time, read some of the reviews at Amazon.com about this book.  Mr. Gerard tells an  intriguing story about a young girl’s search for truth hidden among her father’s bizarre claims of what really happened on that tragic day.

(Note: one Amazon reviewer seems to have mixed up “Truthers” with “Among the Truthers,” by Jonathan Kay, an examination of various conspiracy theories.


Where were you on that fateful morning?  I was at Litchfield Public Library!