New books: be on the lookout for these interesting titles!

Sometimes a book just resonates with you.  Sometimes an author surprises you.  Eoin Colfer has accomplished that in his new book, “The Dog Who Lost His Bark.”  Mr. Colfer usually writes suspenseful, humorous stories like the “Artemis Fowl” series.  “The Dog Who Lost His Bark” is a sweet story that is beautifully illustrated.  Although it touches on some heavy subjects like abuse and abandonment, things work out in the end.   I was interested in this book because I re-homed a tiny little dog that had been debarked.  She has about half a bark, and it’s surprising what a difference that makes in her vocalizations.  If you’d like to see a clip of her bowing and grinning, visit my Facebook page.  Go to www.facebook.com and type Jan Pease in the search bar. 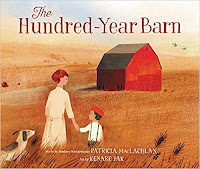 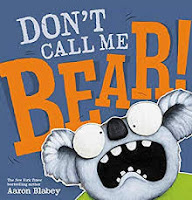 I love koalas.  Actually, I like to watch animal and veterinary shows on PBS, National Geographic Wild, National Geographic, and Animal Planet, to the despair of family members who prefer “something with a plot.”  “Don’t Call Me Bear!” is a funny book written by Aaron Blabey that tells the story of a koala who resents being called a bear.  As in “koala bear,” which is what most of us call this adorable marsupial.  The Koala says, “G’day my name is Warren and I’ve got something to share…Just because I’m furry DOESN’T MEAN THAT I’M A BEAR!” 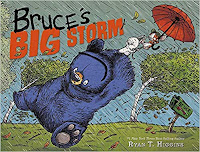 “Bruce’s Big Storm,” by Ryan T. Higgins, is another grumpy animal story.  This is the new book in the “Mother Bruce” series.  Instead of Mother Goose, we have Mother Bruce, who raises a family of  baby geese.  In “Bruce’s Big Storm,” Bruce gives shelter to his animal friends and ends up with a very full house in spite of his grumpiness. 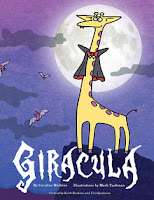 Just in time for Halloween, the library has received two very silly “scary” books.  “Giracula,” by   Hide your pies and cakes!  “The Curse of the Werepenguin,” by Allan Woodrow, is written for slightly older but still silly readers.  A boy named Bolt visits a baron who claims to be a distant relative but seems to be a twelve-year-old boy who wears tuxedos and shouts at people all the time.  When Bolt is bitten by the baron, he turns into a half-boy, half-penguin creature.  And it only gets worse from there.

Caroline Watkins, is about a vampire giraffe that has a taste for sweets.

These sentimental, interesting and silly books are waiting for you at Litchfield Library.  See you there!