Fun and History in Walnut Grove 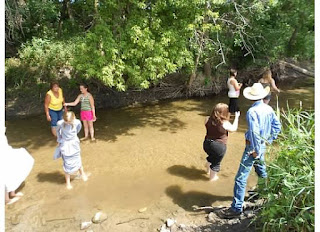 On Saturday, July 7th, I led a group of people from Dassel, Litchfield, and Grove City to the Laura Ingalls Wilder Pageant in Walnut Grove, Minnesota. Pioneerland Library System collaborated with Plum Creek Library System to our south to bring busloads of library patrons from our region to the pageant. This was sponsored in part by Minnesota’s Arts and Cultural Heritage Fund, as well as by the pageant itself. 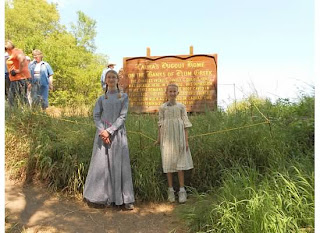 Our group went early enough to take in some of the other Ingalls attractions in Walnut Grove. We visited the dugout site, where the Ingalls lived during the book On the Banks of Plum Creek. It’s a privately-owned farm where the family allows tourists to visit for a small fee. The dugout itself collapsed long ago, but the sunken spot is there to see. The Ingalls family certainly lived in small houses for most of their lives. 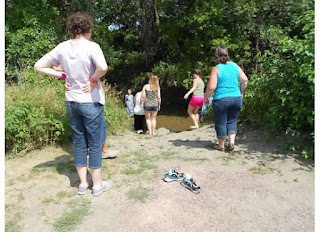 Visitors can wade in Plum Creek just like Laura, Mary, and Nellie did. Several people in our group went in. Luckily no one encountered leeches or a “crab” (I would imagine it was really a crayfish) in the stream, which Laura and Nellie did in the book. 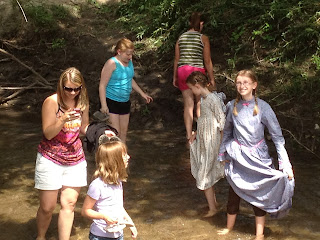 I’m a lifelong fan of the Little House books, so it was exciting for me to stand in that place described so carefully by Laura. It looks like so many other places around Minnesota, but it’s been immortalized by being included in a classic children’s book. 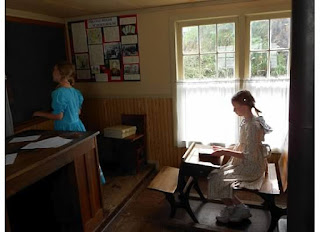 After leaving the dugout site, I set our group free in the town of Walnut Grove to visit the Laura Ingalls Wilder Museum or to go to the Family Festival taking place that afternoon. I toured the museum, which is a group of small buildings. They include a schoolhouse, a dugout, a chapel, and some old-fashioned houses, and they house the museum’s collections. This museum has little that belonged to the Ingalls, but it teaches visitors about her life and times and her books, as well as the television series that was based loosely on the books. 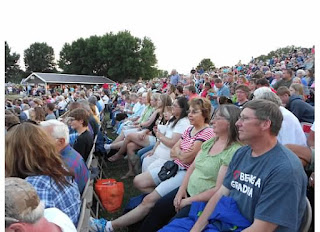 In the evening we all boarded the bus for the pageant, which takes place a short distance outside of town. The chairs are on a hillside, with general seating open on either side for people who bring blankets or lawn chairs. The stage area includes a permanent dugout and a pioneer town backdrop. The production itself was impressive. It’s community theater that’s perfected by performing the show every year. The Ingalls family rides onto the stage area in a covered wagon pulled by a team of horses. The church is a massive set piece that’s put up by the cast and crew when the congregation builds a church in the story. The prairie fire is real fire, and really exciting. The “social” is a big dance number that is a showstopper. When Mary loses her sight, it’s very sad. Nellie and Willie are appropriately obnoxious. The play is funny, it’s touching, and it shows the immense difficulties that Minnesota settlers faced in the 19th century. 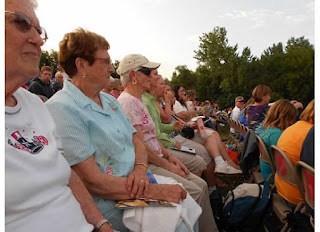 Our group enjoyed the trip very much. The participants ranged in age from 8 to senior citizen. They gave the program high marks for being very enjoyable, and some said they could not have had this experience without the library-sponsored trip. If you are a Little House fan who hasn’t been to the pageant, I recommend it to you as a great arts and history program that celebrates one of our most famous Minnesota authors.

Posted by Litchfield Public Library at 10:32 AM