Read local! Find the best Minnesota books at your library

This year’s Minnesota Book Award winners were just announced on April 13 at the awards gala in St. Paul.  Books created by writers or illustrators who are Minnesotans are eligible.  Panels of volunteer judges, including such people as booksellers, librarians, publishers, book reviewers, teachers, and writers, choose the winners.

Our library has several of the winning books available for you to check out.

This year’s award for general nonfiction went to David Treuer for Rez Life: An Indian’s JourneyThrough Reservation Life.  Treuer is a professor and novelist who won the Minnesota Book Award in 1996.  He lives part-time on the Leech Lake Reservation in northern Minnesota.  The book focuses on the Ojibwe reservations of northern Minnesota and Wisconsin.  This first nonfiction book by Treuer is also the first book written by an insider about Indian reservations.

The award for genre fiction was given to David Housewright for his mystery, Curse of the Jade Lily.  Housewright won an Edgar Award for his first novel in 1996, and two previous Minnesota Book Awards in 1998 and 2009.  Curse of the Jade Lily is the ninth novel in the Rushmore McKenzie crime series.  The 200-year-old Jade Lily is stolen from a Minneapolis art museum, and the thieves offer to sell it back at less than its value if private eye McKenzie acts as the go-between.

Atina Diffley won this year’s award for memoir and creative nonfiction for Turn Here Sweet Corn:Organic Farming Works.  Diffley and her husband owned and operated one of the first certified organic farms in the Midwest from 1972 to 2007.  They now run a consulting business, Organic Farming Works, LLC.  In this memoir, Diffley tells their story of starting out in organic farming when it was a new thing.  She focuses on human relationships with the earth, plants, animals, and communities. 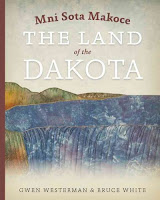 The Award for Minnesota was given to Gwen Westerman and Bruce White for their book Mni Sota Makoce: The Land of the Dakota.  This nonfiction book pulls together a detailed history of the Dakota people living in Minnesota for hundreds of years, based on oral history interviews and archives.

Louise Erdrich won the National Book Award for The Round House before the book won the Minnesota Book Award for Novel and Short Story this year.  Set in 1988 on a reservation in North Dakota, the novel tells the story of a 13-year-old’s quest with his friends to find answers about a traumatizing, racist attack on his mother.  Tragic, comic, and spiritual, many have described this as Erdrich’s best novel yet.

Come to the library to find some of the best books our state has to offer from the past year and from the past twenty-five years of the Minnesota Book Award.

Posted by Litchfield Public Library at 10:48 AM