Books and Books, and More Books!

By Jan Pease
To celebrate the Beginner Book Club book, Andrew Lost: On the Dog, I put several color pictures of common things at extreme magnification on the children’s desk.  It’s amazing to see how alive Velcro looks, or how fierce a honey bee can seem.  The answers are on the back of each picture, so take a peek.  The Andrew Lost series is on order, because we really enjoyed reading the first book. 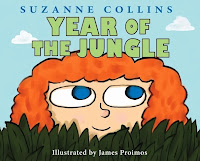 Several significant books have crossed my desk this week.  Suzanne Collins drew from her childhood experiences when her dad was deployed in Vietnam in 1968. Her newest book, Year of the Jungle, provides a poignant look at the Vietnam experience through a child’s eyes.  In 1968, I was 15, and had somehow become used to seeing the war on the news every night.  Ms. Collins remembers looking up, seeing video of soldiers unmoving on the ground, and being terrified, because her father was there. 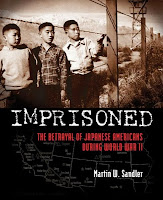 Martin W. Sandler, who is well known for his Through the Lens series, has written and illustrated Imprisoned: The Betrayal of Japanese Americans During World War II.   School Library Journal states: “Sandler expertly crafts a narrative that manages to explain the horror and incomprehensibility of locking up American citizens in prison camps simply because of their ethnic ancestry. Japanese American relocation has long been expurgated from school history texts about World War II, and here this delicate topic is handled with sensitivity and insight, providing an in-depth look at the full story, from anti-Japanese sentiments during the first wave of immigration through more current issues such as redress.”  Most children’s books soften the message about war and its consequences.  Mr. Sandler uses strong, active words: imprisoned rather than interned, and he is straight forward about   prejudice in the 1940’s and today.

Jack Gantos received the Newbery Medal in 2012 for his book, Dead End in Norvelt.  The long-awaited sequel has arrived.  From Norvelt to Nowhere promises to be as fast paced and funny as its predecessor.  There is already award buzz about this title, which was just released September 24th.

Finally, VIII is a blend of fact and fiction, written by H.M. Castor.    Ms. Castor is an English historian and author who lives in Bristol, England.  Her research and love of the Sixteenth century led her to write this book about Henry the Eighth.  This YA novel is a great example of what historical fiction can be.  The author recommends the website British History Online (british-history.ac.uk) because of the wealth of information it contains. If you’re interested in maps, historical documents, or the bill for “two pair of perfumed gloves of crimson velvet and purple, trimmed with buttons of diamonds and  rubies,” this is the website for you. And if you enjoy historical fiction, read VIII.
Posted by Litchfield Public Library at 4:52 PM