Nothings Smells As Wonderful as A New Book!

At Toddler Time this week we talked about using our noses to smell.  We scientifically tested cinnamon, lemon, lavender, rose, vanilla, and mint, and we  agreed that mint smells like gum, lemon smells like gummy bears, and the rest smell like “spray.”   What smells do you like?  My favorite smell of all is the wonderful aroma of a new book. 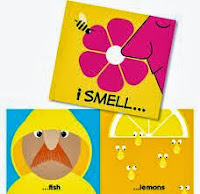 The smelly toddler time was inspired by a series of concept books illustrated, designed, and published by Patrick George.  They include I Taste, I Hear, I Smell, and I Touch.  These very simple books are the basis of our first fall Toddler Times, as we experiment on the level of 2 and 3 year olds.  That’s my kind of science!

Musk Ox Counts is my kind of math book.
The hilarious musk ox and zebra that got out of control in A is for Musk Ox do it again in this second book by Erin Cabatingan and Matthew Myers.  On the back cover this math problem tells it all: 1 rowdy musk ox + 1 annoyed zebra = 1 awesome counting book.

Peter Abrahams is an extremely talented author, called “my favorite suspense novelist” by Stephen King.Mr. Abrahams  is starting a new series for middle grade young people, Robbie Forester and the Outlaws of Sherwood Street.  This is a light-hearted Robin Hood tale with a touch of magic thrown in. This story of Robbie and her friends  would be a fun read for those aged 10 and older.

Mike Lupica writes for the New York Daily News, appears on ESPN television, and is a radio host. His books routinely hit #1 on the New York Times bestseller lists.  He draws from the real-life Manning family of quarterbacks to tell the story of Jake Cullen.  The book is titled QB1.   Jake is a freshman in high school who has always lived with the pressure of measuring up to the legacy of his father and older brother.  Mr. Lupica is known for writing fast paced books with a strong story line and compelling characters.  I think anyone could read and enjoy   this book, but young men, middle school and up, are the target audience.
lists.

United We Spy continues the story of Cammie Morgan and her friends.   Ally Carter concludes her series about the adventures of the “Gallagher Girls” as they finish their senior year in high school and embark on careers as scientists, heroines, or spies.  This refreshing series has been a nice change from the dark novels about teenagers facing threats of zombies, paranormal love interests, and  alien invasions.  I’m sorry to see the series close, but will it really end?  The conclusion of United We Spy leaves a door open for the next chapters in Cammie’s improbable life. 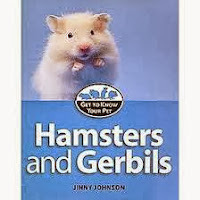 One beautiful non-fiction book in the “Get to Know Your Pet” series, makes me want to rush to the pet store and buy some gerbils.  Jinny Johnson wrote Hamsters and Gerbils and does a nice job explaining dwarf hamsters and gerbils to children.  She includes information for parents, a glossary, an index, and websites to explore.  I love these gentle little animals, which can sometimes live for a surprisingly long time.  Hmmmm. The cage and aquarium combination are still in our garage……  See you at the library!