STEM at the Library 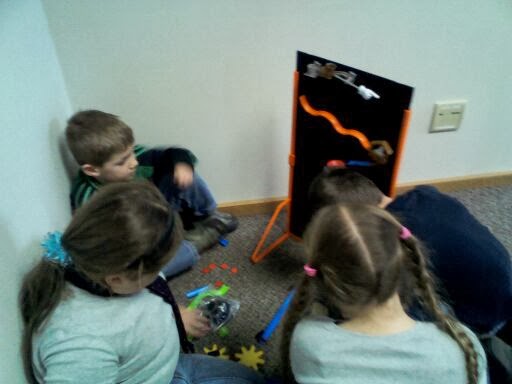 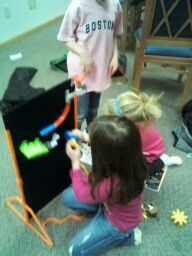 Fun times at the library!  Darcy Cole, local 4-H coordinator, sent some pictures taken at Fun with 4-H Tuesday, January 14.   Students built “Rube Goldberg” designs that looked like the game “Mouse Trap.”  I would have loved doing that when I was the age of these students.  It’s an ingenious way to learn about science, technology, engineering, and mathematics, now often referred to as STEM. 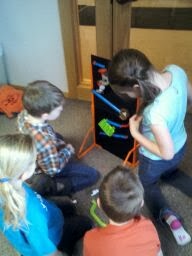 LEGO Building Blocks are another fun way to incorporate STEM experiences into the lives of our children.  We hope that young people ages 8-14 will come to the first building club tonight, January 23rd, at 6:30 p.m.  Brandt Johnson is a big LEGO fan. I think of him as a “master builder,” but he tells me he’s just a regular dad, not an official LEGO master.  We’re calling our group, “Brickheads.” If you love to build with LEGOS, come and join in.  Story Hour will still take place at 7, so younger children will have something to do. Parents are always welcome to join in the fun.

School Library Journal sponsors its own version of “March Madness,” called the Battle of the Books.    The contenders and judges for the sixth annual “Battle of the Books,” have been chosen, and now it begins, as of January 15th.  I think it would be a good winter activity to have our own Battle of the Books.  Read as many of the books on the list as you can, make your choices, and we’ll post the winners week by week and compare them to the national results as they are posted at School Library Journal.  Basically, the judges choose between two books at a time, the “battle.”   The winner advances through the brackets, just like basketball.  I’ll post a chart at the children’s desk and it will begin to make sense.

Look for these titles, which are great reading, and follow the Battle of the Books at the School Library Journal website, http://blogs.slj.com/battleofthebooks, and at the children’s desk at Litchfield Public Library.

Here is the list of contenders:
ALL THE TRUTH THAT’S IN ME by Julie Berry
THE ANIMAL BOOK by Steve Jenkins
BOXERS AND SAINTS by Gene Yang
A CORNER OF WHITE by Jaclyn Moriarty
DOLL BONES by Holly Black
ELEANOR AND PARK by Rainbow Rowell
FAR FAR AWAY by Tom McNeal
FLORA & ULYSSES by Kate DiCamillo
HOKEY POKEY by Jerry Spinelli
MARCH BOOK ONE by John Lewis, Andrew Aydin, and Nate Powell
MIDWINTERBLOOD by Marcus Sedgwick
P.S. BE ELEVEN by Rita Williams-Garcia
ROSE UNDER FIRE by Elizabeth Wein
THE THING ABOUT LUCK by Cynthia Kadohata
TRUE BLUE SCOUTS OF SUGAR MAN SWAMP by Kathi Appelt
WHAT THE HEART KNOWS by Joyce Sidman

The winner of the 2013 BOB was: No Crystal Stair, by Vaunda Micheaux Nelson.  May the best book win!
Posted by Litchfield Public Library at 2:30 PM