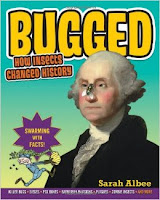 One of my mother’s catch phrases was “it’s a buggy year.”  It almost always was a buggy year, no matter what state we lived in.  Perhaps she would have approved of a charming book by Sarah Albee, “Bugged: How Insects Changed History.”  The book is printed in purple ink with green accents, and as the cover says, it’s “swarming with facts!”    Chapters include “Close Encounters of the Ancient Kind,” “More Thinking but Still Stinking:  The Renaissance,” and other great chapter titles. 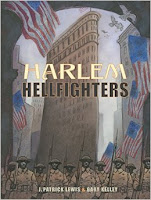 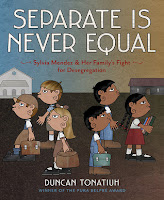 Two new nonfiction picture books tackle significant issues.  “Harlem Hellfighters,”  by J. Patrick Lewis and Gary Kelley,   tells the story of the 369th Infantry Regiment, the 15th New York National Guard in the First World War.  The army was segregated, and these brave black men from New York City proved themselves as they did whatever was required of them.  They also brought the sound of Harlem jazz to France.

“Separate is Never Equal: Sylvia Mendez and Her Family’s Fight for Desegregation,” by Duncan Tonatiuh, received both the Pura Belpre Award and the Robert F. Sibert Honor Book.  This remarkable book explains how a brave girl and her family fought for her right to attend regular school in California. 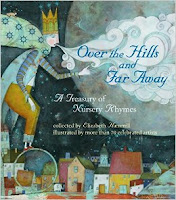 “Over the Hills and Far Away” is a treasury of nursery rhymes collected by Elizabeth Hammill.  The rhymes are both familiar and exotic, but the illustrations will blow you away.  Seventy seven artists contributed stunning, full-color art for this collection.  It really is a treasure. 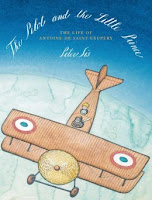 “The Pilot and the Little Prince,” a nonfiction picture book by Peter Sis, tells about the life of Antoine De Saint Exupery, the author of “The Little Prince.”    Information about the early days of aviation is packed into this slim volume  about a beloved author and incredibly interesting man.

David J. Smith has written a nonfiction picture book titled “If… A Mind-Bending New Way of Looking at Big Ideas and Numbers.” For example, Mr. Smith says, “If all the food produced around the world in one year were represented by a loaf of bread with 25 slices … 11 slices of bread would come from Asia, but 13 ½ slices would be eaten by Asians. “  It really is an interesting way to look at global issues. 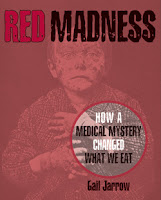 Finally, a substantial nonfiction book by Gail Jarrow, “Red Madness,”  explores Pellagra,  the devastating illness caused by poor diet.   This is the reason our bread and so many other foods are enriched, but for many years it was a medical mystery.