What do you call a book that is fun to read, looks like a picture book, but is full of information?  Great nonfiction, and that is what these new books have in common.  They are nonfiction books that masquerade as picture books. 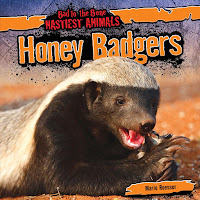 “Do you have any books about honey badgers?” asked a young patron. Now we do, a  book from the series, “Bad to the Bone: Nastiest Animals.” The title of the book is “Honey Badgers,” and it was written by Marie Roesser.   If I thought about them at all, I thought of them as a cuter cousin of our own American badger.  I learned that while they are from the same family as otters, badgers,  weasels, martins, and polecats,  Mustelidae, honey badgers have their own  subfamily, Mellivorinae.  Their scientific name is Mellivora capensis.  Their main predators are lions, leopards, and man.  They are fearless, and will stand their ground against a lion or leopard.  Some people hunt them for meat, but it is said that they don’t taste very good.   This is an unusual animal, which is  beginning to be threatened in Africa, India, and the Arabian Peninsula. 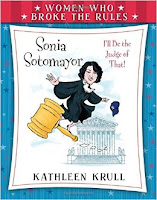 Today I also learned that famous children’s author Kathleen Krull was fired from a part-time library job when she was fifteen.  The reason?  She was reading too much while she was supposed to be working. She writes award-winning nonfiction books about interesting people, and her new series, “Women Who Broke the Rules,” gives readers a glimpse into some interesting lives.  The first three books in the series are about writer Judy Blume, Supreme Court judge Sonia Sotomayor, and incredible guide Sacajawea.  Ms. Krull has an easy, breezy style but includes a lot of information.  Each book includes an index, list of sources, and websites for further reading. 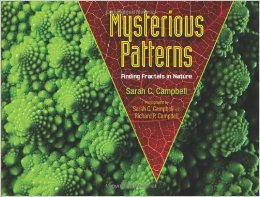 Today I also learned about fractals, which didn’t exist as a concept until 1975.  I still can’t say I understand them, but I love the word.  Sarah C. Campbell  and her husband, Richard C. Campbell have written and illustrated a book titles, “Mysterious Patterns: Finding Fractals in Nature.”    The afterword in the book was written by Michael Frame, a mathematician who worked with the late Benoit Mandelbrot, the inventor of the word, “fractal,” who developed the theory of fractals in nature.   Mr. Mandelbrot thought in shapes and liked to find connections between ideas.  He realized that the things he had been studying were made up of little parts that looked like the whole thing.  An example could be a head of broccoli, a tree, or lightning.  At first other scientists ignored his work, but now many scientists have realized that people can build things the same way nature does.  Mr. Frame says that Harry Potter’s invisibility cloak would have been made of fractals.  Now that’s a reason to study math! 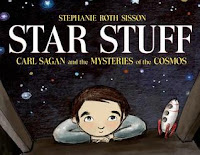 Stephanie Roth Sisson has illustrated more than sixty books for children,  but now has written and illustrated  her own  book, “Star Stuff: Carl Sagan and the Mysteries of the Cosmos.”   You may
remember his television series, “Cosmos,” which is available on dvd through Pioneerland Library System.  His imagination was limitless; his statement that “the Earth and every living thing are made of star stuff,” has led many young people to investigate space and beyond. Today I was reminded  that the Voyager Spacecraft, which was one of Mr. Sagan’s projects, left our solar system in September 2013 and is still traveling among the stars.  Incredible.