“Congress shall make no law respecting an establishment of religion, or prohibiting the free exercise thereof; or abridging the freedom of speech, or of the press; or the right of the people peaceably to assemble, and to petition the Government for a redress of grievances.”   This is the first amendment to the U.S. Constitution.  May I say that I’m completely in favor of our right as U.S. citizens to have freedom of speech? 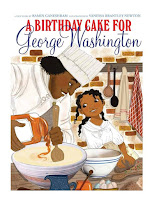 You really wouldn’t think that the world of children’s literature could be a hotbed of discussion about freedom of speech, but it is.  The news that Scholastic recalled its book, “A Birthday Cake for George Washington,” by Ramin Ganeshram, took me by surprise.  This book and another book by Emily Jenkins, “A Fine Dessert: Four Centuries, Four Families, One Delicious Treat,” have been criticized because of their portrayal of slaves, a parent and child, making a dessert for their Caucasian owners.   They are shown with smiling faces, working together to make a birthday cake with a small supply of sugar in the birthday cake book, and a blackberry fool in the fine dessert book. The issue is that both books portray slavery as unpleasant but not horrible.

Scholastic simply pulled the George Washington book, which was based on a talented slave named Hercules who was owned by President Washington. Amazon.com no longer has it available for Kindle, and the hardcover price is now something like $174.99.  The real Hercules fled from President Washington at   the time of his 65th birthday. According to some sources, he fled from Mt. Vernon during the birthday celebration; other sources state that he fled from Philadelphia. President and Mrs. Washington did celebrate his birthday in Philadelphia.   If Hercules was so happy, why did he run? 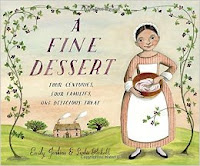 Emily Jenkins apologized publicly for her insensitive portrayal of the slaves in “A Fine Dessert.”   In a comment on the blog, “Reading While White” she stated: “As the author of “A Fine Dessert,”  I have read this discussion and the others with care and attention,” Jenkins writes in her comment. “I have come to understand that my book, while intended to be inclusive and truthful and hopeful, is racially insensitive. I own that and am very sorry.”  http://readingwhilewhite.blogspot.com// is an interesting blog to read if you are interested in the discussions about race and children’s literature. 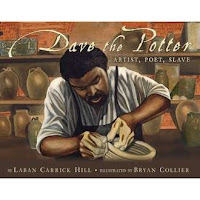 How much can we expect of picture books?   A patron asked me what book I could recommend to counter balance this sort of representation.  The first book I thought of, “Dave the Potter,” by Laban Carrick Hill, is a gorgeous book that captures the quiet dignity of the master potter without trying to paint a saccharin picture of happy slaves. Still, the idea that an individual owned another individual is abhorrent to me.

Should these authors have the right to express their opinions?  I would say a firm, “Yes!” Should they do more research before writing books that touch this difficult subject? Again, I would say, “Yes, they should! That’s part of the problem.”  Should we have the right to read these books and make our own decision?  Again, “Yes.”   If I were a black mother, I would rather have my child read “Dave the Potter” than the other books.  “A Fine Dessert” is available at Litchfield library; “A Birthday Cake for George Washington” is not.  If you’re interested in why we bought one and not the other, ask me when you’re visiting the library.
Posted by Litchfield Public Library at 4:24 PM