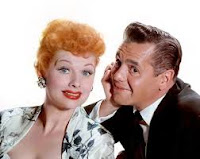 Did you know that Desi Arnaz never actually said, “Lucy, you’ve got some ‘splaining to do?”   That apparently random thought may make a little bit of sense later. 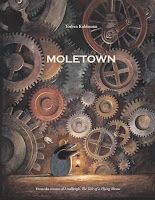 When I was a child, I liked to draw underground spaces with tunnels and ladders and such.  An illustrator who lives in Germany, Torben Kuhlmann, must share this fascination with the world beneath. His new book, “Moletown,” is a picture book with elements of steam punk in it.  Gears, amazing underground machines, stairs that go down forever, and moles sitting in front of broad spectrum lights give this book a touch of the bizarre.   Be sure to examine the end papers closely, because they show the history of Moletown and help make sense of this nearly wordless book.  Be prepared to explain what’s going on if you share this one with a child. 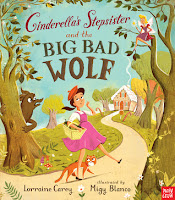 If you enjoy fairy tales that are turned upside down and inside out, look for “Cinderella’s Stepsister and the Big Bad Wolf,” by Lorraine Carey.  Ms. Carey mixes together villains and heroes from several fairy tales in this spoof of Cinderella.  In this story, Gertie, the third Ugly stepsister, is the kind member of the family.  Mrs. Ugly, the other two Ugly sisters, and Cinderella are all pretty nasty.   The fairy godmother sends the Big Bad Wolf and Gertie to the ball in beautiful dresses, and turns Cinderella into a mouse.  Gertie and the prince live happily ever after, but the Ugly sisters have disappeared.  The only explanation is a picture of a pile of bones on Big Bad Wolf’s plate, as she enjoys a glass of champagne with a coy expression on her face.  This is another book that may require some explaining. 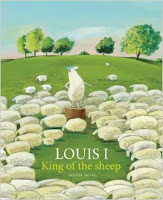 “Louis I, King of the Sheep, “by Olivier Tallec, is a book that was translated from the French by Claudia Zoe Bedrick.  This is another picture book that requires some explaining.  Louis is an ordinary sheep who discovers a blue crown out in a windy field.   He immediately crowns himself  Louis the First and begins to assume all the trappings of royalty.  When his crown blows away, he becomes an ordinary sheep once again, but the crown is found by a…  I won’t spoil the ending for you, but it’s interesting. 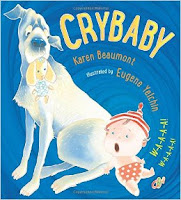 Now here are two picture books that won’t require “ ’splaining.”   “Crybaby,” by Karen Beaumont is a sweet story about a crying baby and the cumulative efforts of her family and neighbors to stop the tears.  A double page illustration shows some interesting efforts by people wearing pajamas and slippers, including magic tricks and juggling, but nothing works.  Faithful dog Roy keeps trying, but the humans all ignore his attempts to help, until he gives the baby her favorite toy, a white and woolly little sheep.  “Quiet baby, what a joy. Good boy, Roy!” 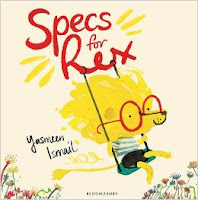 British author and illustrator Yasmeen Ismail, who wrote and illustrated “Time for Bed, Fred,” has published a new book, “Specs for Rex.”  All of us who began wearing glasses in childhood will identify with Rex, a little lion with round, red glasses who tries to hide them at home and school.  I love his carefully edited explanation of his day when his mom askes how school went.  He carefully leaves out combing his mane over his face, hiding in the classroom tent, stashing his glasses in his sandwich, painting them to look like sunglasses during art, and running around outside wrapped in toilet paper.  Rex tells his mom that he found his teacher’s missing whistle and got a gold star.

Writing about all of this explaining has triggered a nostalgic feeling in me.  I think it might be time to watch a few episodes of “I Love Lucy” and not worry about how cold it is outside.  See you at the library! 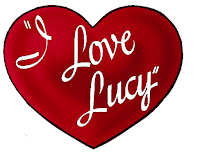