The world of children’s literature is still buzzing about “A Birthday Cake for George Washington” and the message it presented about happy slaves serving our first president.  Huffington Post posted an article in which the author of “A Birthday Cake for George Washington,” Ramin Ganeshram, explains her side of the issue; you can find it at http://www.huffingtonpost.com/ramin-ganeshram/  I  also put a link to this article on the library Facebook page.    It is well worth reading.  The blog, “Reading While White” also continues the conversation about diversity in books.  Again, there is a link on the library Facebook page.

Meanwhile, back at the library, five interesting books came in just this week.

“Nathan Hale’s Hazardous Tales: The Underground Abductor” is a graphic novel by Nathan Hale from Utah, who shares the name of Nathan Hale, the patriot executed in 1776 as a spy.   The patriot Nathan Hale somehow tells stories from the United States of the future to his British executioners before his death by hanging.    This book begins with the story of Araminta Ross as a child.  This strong woman   later changed her name to Harriet Tubman.  The humor is a little too comic-book style for my taste, but Mr. Hale packs a lot of history into these pages.

Shane W. Evans has written and illustrated “Und
erground: Finding the Light to Freedom.”  This book uses very few words to express very big ideas.  It received the Coretta Scott King Award in 2012, but I missed it then.  I’m glad we added it now. 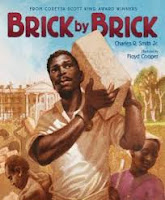 Another Coretta Scott King Award winner, “Brick by Brick,” by Charles R. Smith Jr., tells about a part of history that I didn’t know about.     The original White House, built in 1792, was built by slave labor.  Owners were paid 5 dollars a month for the use of their slaves.  This White House was burned in 1814 but was rebuilt and restored.   Building the original White House allowed some of the slaves to earn enough money to purchase freedom.  Mr. Smith writes, “Slave hands count shillings with worn fingertips and purchase freedom brick by brick.” 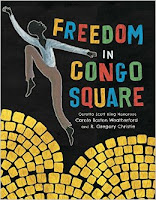 “Freedom in Congo Square” was written by Carole Boston Weatherford and illustrated by R. Gregory Christie; each received the Coretta Scott King Award for other projects.  I didn’t know that in Louisiana slaves were allowed Sundays off, and were allowed to congregate on Sunday afternoons in Congo Square.  They preserved their language and music, rhythm and dancing, and this rich culture must be a factor in why New Orleans is called the birthplace of jazz. 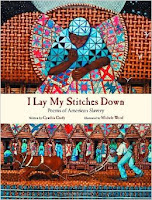 After all of the discussion about who can and should be writing books about ethnic issues, I be


gin to wonder if anyone is qualified to write about a culture not their own.   Cynthia Grady attempts this in “I Lay My Stitches Down: Poems of American Slavery.”  Illustrated by Michele Wood, this book is the perfect combination of text and art.  Ms. Grady is a former children’s librarian.  Her poems are powerful and Ms. Wood’s illustrations reflect that same power.   Ms. Grady is white; Ms. Wood is black.   Writing about a man and woman whose daughter is being sold away from them, Ms. Grady writes, “Her mama moaning low, long burying songs; greedy wheels groaning, drag my heart clean out of my chest, leaving only the grief.”