The Opposite of Boring is...... Fascinating! 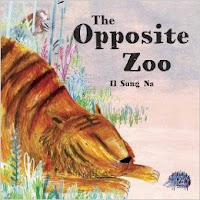 Today at story time we had fun with opposites.    We began story hour with the closing song, had a project about opposites, and read the book, “The Opposite Zoo.”  The preschool children are really very good with opposites.  I said “when I say up, you say_____ and they responded, “down,” with very firm voices.   We ended story time with an opening song, but did not walk backwards into the meeting room for our project.


Here are some new titles that are the opposite of boring.  They are bright, colorful, and sometimes even teach us how to do something amazing. 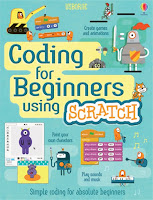 How comfortable are you writing computer code?    Elsewhere in the world, all students learn how to code.  I think it should become one of the basic skills we teach our young people.  No matter your age, look for “Coding for Beginners using Scratch,” by Rosie Dickins, Jonathan Melmoth, and Louie Stowell.  Scratch is  a visual programming language, available free on the Internet.  This book is for “absolute beginners” and teaches step by step by step.   I like having the book in hand to refer to as each step is attempted.   I’ve done the “Hour of Code” available online, and enjoyed it, but I’m much happier with written instructions in front of me. I highly recommend this book. 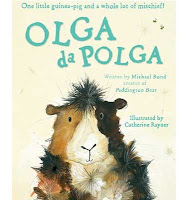 It’s no secret that I really like animals. I even like some rodents, like hamsters and gerbils.  But I’ve never had a guinea pig.  “Olga da Polga,” by Michael Bond may just be the next classic children’s book.  Mr. Bond is famous for creating Paddington Bear, and is now 90 years old.   He published “The Tales of Olga da Polga” in the 1970’s.  Olga’s stories may now be found in “Olga da Polga,” with beautiful illustrations by Catherine Rayner.    Olga is an imaginative guinea pig who tells tall tales to her friends in the garden.  My favorite tale is her story of the Surrey Puma.

Laurence Yep and Joanne Ryder are writers who just happen to be married to each other.   They have a new series that began with the book, “A Dragon’s Guide to the Care and Feeding of Humans.”  The second book in the series is “A Dragon’s Guide to Making Your Human Smarter.”    How could a dragon make her pet human smarter? Why, by sending your pet to school, of course, but only a very special school will do.  Spriggs Academy is for both magicals and naturals and sounds like it gives a wonderful education.  Mr. Yep and Ms. Ryder say that they were inspired by teachers who could still tap dance as they did on Broadway and who in chemistry class would flash-freeze goldfish in liquid nitrogen and then revive them in water.  It sounds even better than Hogwarts.

Finally, a couple of scary young adult books have also arrived.  “Feel the Fear,” by Lauren Child is the fourth novel starring Ruby Redfort, who thinks she is invincible, but can she catch a thief who seems to be a ghost?  Brandon Mull continues his “Five Kingdoms” series with “Death Weavers.”  Our young hero, Cole, finds himself in the Necronum, a haunting land of the dead.  This one sounds intense.   These fascinating books and 30,000 more are waiting for you at Litchfield Public Library!