Let’s talk book awards.  This past week brought us book awards big and small, with the Pulitzers and the Minnesota Book Awards, and our library has a number of them available for you to check out.

The Sympathizer by Viet Thanh Nguyen won the Pulitzer Prize for fiction.  Although this book has gotten great reviews and has been up for other literary awards, not many people have heard of it.  A mixture of thriller and satire, this novel is described as smart and perspective-changing.  The narrator is a Viet Cong secret agent who evacuates with the last of the South Vietnamese flying out of Saigon.  He then continues to spy on a general and others as they start a new life in Los Angeles in the ‘70s.

The Pulitzer for history went to Custer’s Trials: A Life on the Frontier of a New America by T.J. Stiles.  This biography digs into who George Armstrong Custer was as a person, intense and full of contradictions.  The author focuses on how Custer lived on a frontier in a sense of the time period, uncomfortably navigating the major changes in society that came in the middle of the nineteenth century.  Expect to have your ideas about Custer challenged if you read this one.

The Minnesota Book Award for general nonfiction was awarded to No House to Call My Home: Love, Family, and Other Transgressions by Ryan Berg.  Berg was a caseworker in a group home for homeless lesbian, gay, bisexual, transgender, and questioning (LGBTQ) teens in New York.  Twenty to forty percent of homeless teens in the United States are LGBTQ, mostly because of family conflict and often because their parents have forced them out of the house.  Berg attempts to find patterns in the stories of the kids he worked with, trying to figure out what would help them build healthy relationships and successful lives once they aged out of the foster care system.

Erin Hart’s The Grave Soul won the Minnesota Book Award for genre fiction.  This is the 23rd book in her Jane Lawless mysteries series, which has been going since 1989.  Jane is a (fictional) Minneapolis restaurateur and private investigator.  In this installment, Jane is hired by a man who wonders if his girlfriend’s recurring nightmare about her mother being murdered is true, even though it doesn’t agree with her family’s account of how she died.

The Minnesota Book Award for memoir and creative nonfiction went to Karen Babine for Water and What We Know: Following the Roots of a Northern Life.  Babine’s essays explore how the land affects the people who live on it, and how water is a part of human stories. 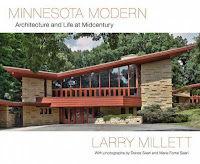 Minnesota Modern: Architecture and Life at Midcentury by Larry Millett won the Minnesota award given by the Minnesota Book Awards.  How’s that for enough uses of the name of our state?  Millett is known for books on Minnesota architecture, such as Lost Twin Cities and Once There Were Castles, as well as a series of novels about Sherlock Holmes in Minnesota.  “Minnesota Modern” explores houses and public buildings that were built between 1945 and the mid-1960s.

The Litchfield Library has copies of all of these books, as well as There’s Something I Want You to Do by Charles Baxter, the winner of the Minnesota Book Award in the novel and short story category, and Red: A Crayon’s Story by Michael Hall, the winner in children’s literature.  Other Pulitzer Prize and Minnesota Book Award winners are available to order in our catalog.  Enjoy some of the best writing our nation and our state have to offer.
Posted by Litchfield Public Library at 1:59 PM