What Happened to all the Books!

If you have noticed some bare shelves in the children’s area, don’t despair.  We are shifting books to make it easier for patrons to locate what they want.  Juvenile nonfiction is now located near the picture book collection.  All juvenile chapter books, both hardcover and paperback, are now shelved together.  The books on CD are now on the north wall.  We no longer have audio books on cassette, because that technology has come and gone.  The manga (Japanese graphic novels) are now on the east wall.  The Spanish language books are also on the east wall.  Several staff members have been involved in the process, and I’m so grateful for their help.  Signs will eventually make all this clear. 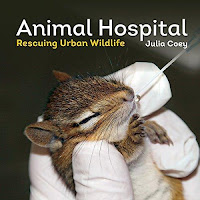 One of the new books that people on the library staff have noticed is Animal Hospital: Rescuing Urban Wildlife, by Julia Coey.  This book was published in the United States and Canada by Firefly Books, and it centers on the work of the Toronto Wildlife Centre in Toronto, Ontario.  Like the Wildlife Rehabilitation Center in Roseville, and the Raptor Center in St. Paul, an amazing number of wild animals live and thrive in urban areas in Canada.  Gorgeous color photographs and interesting information  make this small book seem much larger. 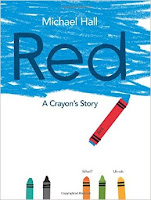 Michael Hall was nominated for the Minnesota Book Award this year for Red: A Crayon’s Story .  He followed that crayon story with Frankencrayon, a truly funny story with great illustrations.  There is drama, there is mystery, and there is even a mad scientist.   Some of the jokes may require some explanation, but this story of very vocal crayons is simply hilarious. By the way, I called it as the winner! 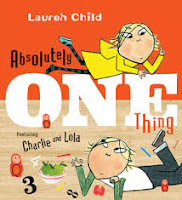 Some interesting math makes Absolutely One Thing, by Lauren Child a potential hit.  She brings back Charlie and his little sister Lola for an adventure that is funny and enlightening.   After all, how many of us understand how many is a squillion?  And is it even a number? 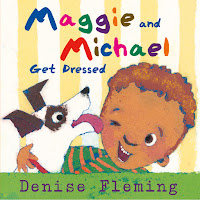 Maggie and Michael Get Dressed is a book by Denise Fleming, whose books for preschoolers are marvelous.  Michael tries his outfit on his dog, Maggie, who is boisterously patient, before putting his clothes onhimself.   Their relationship reminds me of days when our daughter dressed her dog, Scruffy, and pushed him in her doll stroller. 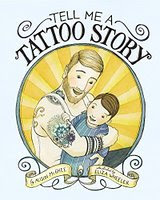 I have never seen a picture book about tattoos but Alison McGhee uses a daddy’s tattoos to give structure to Tell Me a Tattoo Story. The illustrations by Eliza Wheeler are perfect.  A boy loves to hear the stories behind each of his dad’s many tattoos and his dad gently tells each one.  One of the most beautiful tattoos commemorates the most difficult time in his life, when he was away during the war.  I love that the book opens with the dad doing dishes while wearing a tank top that gives glimpses of his colorful artwork. 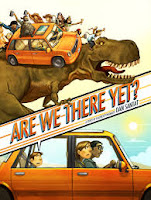 Finally, Are We There Yet? by Dan Santat perfectly expresses the feelings of a child on a seemingly endless road trip to Grandma’s house.  Fortunately, our hero has an active imagination, which makes the time seem to fly by.   These wonderful picture books are waiting for you at the Litchfield Library!

Posted by Litchfield Public Library at 10:46 AM