What is So Special About January 19?

Memory is an uncertain thing, but I can tell you exactly what I was doing the evening of January 19, 1984.  My husband was watching “Hill Street Blues” and I was very, very busy.

Having new books in January is also an uncertain thing, as we end the 2016 book orders and eventually order the 2017 books.  But some of the last books ordered in 2016 have arrived, just in time for the cold snap.  During the last month of collection development I ordered books recommended on various “best of” lists and filled in some series that are popular.

One of those series is “The Lunar Chronicles,” by Marissa Meyer.  Ms. Meyer uses elements from famous fairy tales and somehow mixes in cyborgs and other steam punk and sci fi tropes.  But it works.  In “Scarlet,” the main character’s grandmother has been kidnapped (think, “Little Red Riding Hood”) and Scarlet receives help from an unlikely source: Wolf, a street fighter.    The cyborg from the first novel of the Lunar Chronicles, “Cinder,” is also a character in this book. The cyborg is  notable for having a glass leg instead of a glass slipper.  Interesting concept. 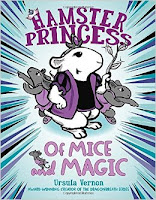 “If the Magic Fits” is the first book of the “100 Dresses” series by Susan Maupin Schmid.  Our heroine, named Darling Dimple, finds a closet filled with 100 old dresses that are magic.  This book is a little long for its audience, but I think elementary aged children will enjoy it.

“A Guide to the Other Side,” by Robert Imfeld, is a book I purchased after re-examining reviews.  I don’t really enjoy books about  spirits and mediums, perhaps because during my childhood a family member became very involved in such things.  Mr. Imfeld’s book is very well-written and is just creepy and spooky enough for 9-12 year olds who enjoy being a little bit scared.

Finally, “The Haunted House Project,” by Tricia Clasen, is a book that presents itself as a ghost story.  Andie is thirteen, lives with her older sister and their father, and their family is falling apart. Her mother died and her father is dealing with grief by gambling.  Sometimes there isn’t food in the house.  Andie decides to draw attention to their problems by making it look like their mom is trying to contact them from “the other side.”  It’s an unusual solution to the family problems, but at the end of the book, Andie says, “maybe we needed to believe in her ghost before we could finally stop feeling haunted.”    This is another book I re-examined after missing it at first.  People and books should have second chances, don’t you think?

By the way, on January 19, 1984, I was busy having our daughter Becca.  Seems like only yesterday.  See you at the library!