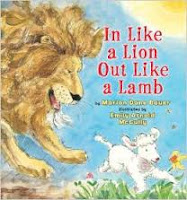 At Story Hour on March 3, we read the book “In Like a Lion, Out Like a Lamb” and made a lion/lamb puppet.  The lion face was on one side and the lamb face was on the other side.  It was a cute project.  It is amazing to watch young children work so intently on a project.

Anyway, the children and I were talking about how a lamb is a baby sheep, and of course that made me wonder why a baby sheep isn’t called a calf or a foal.  I wondered why a baby cow is a calf and not a foal.  And why a baby deer is called a fawn but a baby goat is called a kid.  It gets so confusing, but if you say them out loud, the wrong combination just sounds wrong.  A baby buffalo is definitely a calf, not a foal.

I did a tiny bit of digging and found all kinds of information. English is kind of a patchwork language that borrows from whoever was in charge of Britain after the Romans left.  The Oxford English Dictionary had more information than I wanted, but is a great source. The website is http://public.oed.com.

English also has really unusual words for groups of animals called collective nouns.  For example, a group of alligators is called a congregation.   One of the sources for  many of the strange words for groups of animals is “The Book of Saint Albans,” which was an essay on hunting, hawking and heraldry published sometime around 1486. It was attributed to Dame Juliana Berners but described things a gentleman needed to know. Oddly enough, many of the names are still used today. 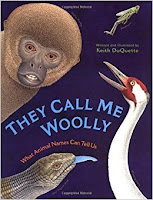 Various educational websites like Enchanted Learning, which is www.enchantedlearning.com, have interesting activities for children about animal names.  I could plan months of story times based on those unusual and archaic animal names.

There are even books to consider if this subject is interesting.  You might try “They Call Me Wooly: What Animal Names Can Tell us,” by Keith Du Quette or “Tanka Tanka Skunk,” by Steve Webb.  “In My Backyard,” by Valarie Giogas is a lovely book of animals that are easily found where we live.  Eric Carle’s famous book, “Does a Kangaroo Have a Mother, Too?”  identifies names of animals and their groups.

It isn’t necessary to know that a group of alligators is a congregation, but it enriches a child’s vocabulary to be exposed to words that aren’t used every day.

Have some fun with words.  I can just imagine Sheldon from “Big Bang Theory” hosting a web show called “Fun with Etymology!”    As always, I hope to see you at the library.