The Greatest Hits from Winter Reads

At the end of March, we wrapped up the adult winter reading program.  Ninety people signed up to participate this year, and as a result we have a whole basket of book reviews the participants turned in to earn their prizes.  It’s always fun to find out who the most popular authors were among our local readers.

One of the most popular was William Kent Krueger and his Cork O’Connor mystery series.  Participants turned in eight reviews of seven of his books; two people reviewed the newest, Desolation Mountain.  On the review forms, we ask people to rate the book on a scale of five stars.  Two different people (based on the handwriting) wrote in additional stars beyond the five because they loved the books so much!  The readers enjoyed the realness of the characters, the Minnesota setting, and the themes of the books. 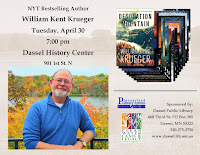 The Dassel Library is bringing Kent Krueger to the Dassel History Center for an event on Tuesday, April 30, at 7 p.m.  He’s a wonderful speaker.  All are welcome to attend this event that’s funded with money from Minnesota’s Arts and Cultural Heritage Fund.

The author with the most reviews this year was J.D. Robb.  Readers turned in nine reviews of seven of her books.  All of the books were from the popular In Death series somehow, featuring police officer Eve Dallas.  The odd one of the bunch was the short story collection Unquiet, which contains an In Death story, among others by different authors.  Two people reviewed that collection, and neither liked it as well as readers liked the novels in Robb’s own series; those got five out of five stars.

James Patterson’s books are popular every year in the reading program.  This year we’ve got eight reviews of seven different books.  Two people reviewed Along Came a Spider, the first in the Alex Cross mystery/thriller series featuring forensic psychologist Dr. Cross.  One of them loved it and the other hated it.  The Patterson reviews are mixed overall, mostly landing somewhere in the middle of the road.

Minnesotans love John Sandford and his novels, which he likes to set in Minnesota, his former home.  Local readers turned in five reviews of four of his books, and they rated them quite highly.  The repeat was Holy Ghost, the newest in the Virgil Flowers series.  Did you know that Sandford’s real name is John Camp and that he won a Pulitzer Prize in 1986 for a series of articles he wrote about the farm crisis for the Pioneer Press?

Our local readers turned in five reviews of Kristin Hannah books, two about the same book, The Great Alone.  The library’s adult book club read this book for our meeting this month, and our members generally enjoyed it.  The reviews for the winter reading program gave it four and five stars, saying this story about a family moving to Alaska had lots of excitement.

Overall, our winter reading participants read a vast variety of books.  While there were other repeated authors, such as Debbie Macomber, Nora Roberts, and Jodi Picoult, most of the hundreds of book reviews were for unique authors and books.  People who use the Litchfield Library don’t all read the same thing.  As they taught me in library school, every person has his or her preferred book, and every book its reader.