Sometimes an author can become wildly popular and still be unknown, especially if he or she uses a pen name.  Daniel Handler is a great example of this.  Do you recognize his name? No?   If I say Lemony Snicket, you probably think of two series, “A Series of Unfortunate Events,” and “All the Wrong Questions.”  The fourth book in the “All the Wrong Questions,” “Why is this Night Different from All Other Nights?” has just been published. The title, words that are spoken at the Passover Meal, reflects Mr. Handler’s background.  He is Jewish, although he describes himself as a secular humanist.    He describes the “All the Wrong Questions” as prequels to “A Series of Unfortunate Events.”

Mr. Handler’s odd sense of humor created a scandal at the National Book Awards in 2014.   He stated that Jacqueline Woodson, author of “Brown Girl Dreaming” and a very famous black author, is allergic to watermelon.  This reference to the racist stereotype created a furor. Mr. Handler apologized and donated $10,000 to the “We Need Diverse Books” project.

“A Shiloh Christmas,” by Phyllis Reynolds Naylor, is the final book in the Shiloh Quartet.  It completes the story of Marty Preston, his family, and his dog Shiloh.  I just had to peek ahead to be sure Shiloh is still alive at the end of the book, because he has been such an important character in all four books.  And I just hate it when the dog dies.  Spoilers: Shiloh has a great Christmas!

Michael Grant’s “Gone” series was full of suspense.  I think his “Messenger of Fear” series leans more toward horror.   The main character, Mara, finds out after her death that she is apprenticed to the Messenger of Fear, a being who visits the wicked and offers them a chance for redemption if they play his cruel game.  If they win, they go free.  If they lose, they have to live out their greatest fear.  In “The Tattooed Heart,” the second book in this series,  Mara and Messenger each wear a tattoo that symbolizes the heart of the crime after offering their brand of justice to a criminal, 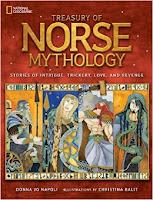 I don’t think Donna Napoli is Swedish, Norwegian, or even Danish.  But she is Professor of Linguistics at Swarthmore College in Swarthmore, Pennsylvania.  Her new book, “Treasury of Norse Mythology,” is a collection of stories from the Norse tradition, with gorgeous illustrations by Christina Balit.  The front cover of the book calls the collection “Stories of Intrigue, Trickery, Love, and Revenge.” 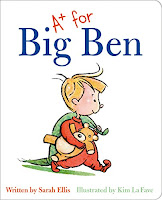 I don’t usually mention board books, but we have received a sweet one. A+ for Big Ben, by Sarah Ellis, gives a glimpse of a youngest child who longs for a report card, with comments.  His wise older sister and brother solve the problem by making him a report card of his own, with subjects such as feeding the cat, shoe tying, tooth brushing, whistling, and making us laugh.  A+ for Big Ben reminds us to focus on the things we can do, instead of what we can’t.