Haunt your library this Halloween

It’s Halloween time, and spooky and scary is the order of the day.  Here are some ideas from Litchfield’s new materials that fit the season:

The Ghost Fields by Elly Griffiths is a Ruth Galloway mystery.  Ruth is a forensic archaeologist called in when a World War II plane with a body in the pilot’s seat is discovered by a construction crew in Norfolk, England.  Ruth ends up trapped in a crumbling English manor on a dark and stormy night.

In a Dark, Dark Wood is a psychological thriller that is very popular right now.  This first novel by Ruth Ware is also set in the English countryside.  A reclusive author accepts an invitation to spend a weekend at a long-lost friend’s strange home, then wakes up two days later not remembering anything except that someone is dead.  This fast-paced story is being compared to Gone Girl and Girl on the Train.

For something gentler, pick up The Ghost and Mrs. Mewer, a Paws and Claws cozy mystery by Krista Davis.  The crew for a reality show about ghost hunters has arrived for the Halloween festivities in Wagtail, Virginia, described as “the top pet-friendly getaway in the United States.”  Holly Miller and her pets discover a young woman drowned in a supposedly-haunted bathhouse, and Holly works to solve the crime before someone else is killed.

For a true story about a ghost (whether the ghost is real or not), check out American Ghost: A Family’s Haunted Past in the Desert Southwest by Hannah Nordhaus.  Nordhaus is the author of the 2011 bestseller The Beekeeper’s Lament.  For her new book, she researched the life and supposed afterlife of her great-great-grandmother Julia Schuster Staab, a Jewish immigrant who died in 1896.  Sightings of a dark-eyed woman in a long black gown were first reported in the 1970s in the Santa Fe hotel that used to be her home.  Nordhaus tells of her ancestor’s frontier history and examines how a true story becomes a ghost story.

For another nonfiction book that seems to fit the season, place a hold on The Witches: Salem, 1692 by Stacy Schiff.  Schiff won a Pulitzer Prize in 2000 for the book Vera (Mrs. Vladimir Nabokov) and had a number one best-seller with her book Cleopatra: A Life in 2010.  The buzz about this book is tremendous, with many people saying it’s the best book on the Salem witch trials that has ever been written.  We've got a waiting list on this one and it won't be published until October 27th, so put your name on the list if you’d like to read it soon.

On the afternoon of Halloween, which falls on a Saturday this year, our library is hosting a Halloween murder mystery costume party for teens, ages 12-18.  Called “Get Away (with murder?) @ your library,” this is a Teen Read Week event.  The 2-hour party starts at 1:30 on the 31st.  The murder mystery will involve a live Clue-style game (not a board game) with prizes to win along the way.  Costumes are optional, and refreshments will be served.  Happy Halloween! 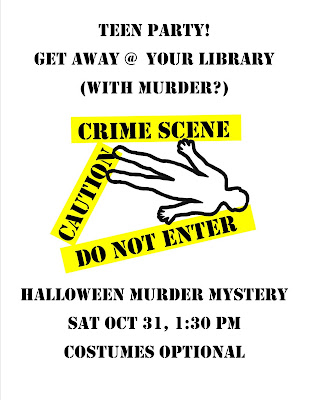