So Many Books, So Little Time

Suppose you are a fan of say, John Sandford and you wonder what to read next.  What do you do?
Well, this little article may just help you find your next great reading experience. 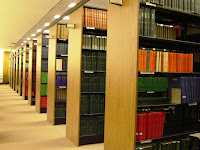 One thing you can do is walk up and down the shelves, waiting for something to catch your eye.  With thousands of books to choose from, there is probably something that will interest you. This is
inefficient, to say the least!

Another easy way to find that next book is to simply type “if you like John Sandford” into the Google search bar and see what Google offers.   Google came up with 7,800,000 sites that offer read alikes.  It works, but is a pretty broad result.  The top answers when I tried it were goodreads.com, media.bookbub.com, and bookbrowse.com as well as seven million, eight hundred thousand, nine hundred and ninety seven others.  This  also is not a model of efficiency.

A more organized way to find books you might enjoy is to look at a book-selling website, such as barnesandnoble.com (bn.com for short) or amazon.com.  These web sites show “customers who bought this item also bought” examples and include reviews from customers who are not professional book reviewers.  So if we look at John Sandford, we can get an idea of what customers who purchased his books also purchased.  On bn.com, Michael Connelly and David Baldacci popped up, along with Mr. Sandford himself.

On amazon.com, David Baldacci and Michael Connelly showed up, along with Jonathan Kellerman, Lee Child, James Patterson, and Jeffrey Deaver.  Of course, since John Sandford has written so manybooks, his name shows up for about 7 pages of “also purchased.”

A site that I’ve mentioned before is fantasticfiction.com.  This site has some unique features that make it easier to narrow the search.  If I type in John Sandford, I will get a nice list of all his books, both those written solo and those he has co-written.  But the really nifty things show up if you scroll down.  There is a section of books recommended by JOHN SANDFORD! Himself!
And there is a section that shows that visitors to his page also looked at, you guessed it, Michael Connelly and David Baldacci, as well as Lee Child, James Patterson, Stuart Woods, Harlan Coban, John Grisham, Robert Crais, C.J. Box, Clive Cussler, Jonathan Kellerman, Daniel Silva, Jeffrey Deaver, Janet Evanovich, J.A. Jance, and Kyle Mills.


My favorite method of finding authors is a website called literature-map.com.  A friend mentioned on Facebook that she discovered it last year, but it’s new to me.  What else do readers of John Sandford read?  I typed in his name, and like magic more than fifty names popped up, with John Sandford in the middle.  The closer two writers are, the more likely someone will like both of them.  The closest   names in my first search were Michael Connelly, David Baldacci, Lee Child, James Patterson, Stuart Woods, Jonathan Kellerman, J.A. Dance, Jeffrey Deaver, Daniel Silva and C.J.Box, as well as at least 43 other names.  The fun begins when you click on one of the names arranged around John Sandford’s name.  The screen changes, with the new name in the center and other names around it.  I chose Lee Child, and it was interesting to see some of the same names come up.  There were several different names as well.

This is a sample literature map centered around Martin Amos.

It’s important to remember that writing styles aren’t being analyzed here.  The parent site, gnooks.com, was developed by a German named Marek Gibney, who calls it a self-adaptive system that learns by asking visitors what they like.  It then thinks of other writers that the visitor might like.  To participate, go to gnooks.com.  If you type in three authors you like, the site will suggest names to you which you then can like or dislike.  You can add your email if you want to receive information about new things on the site, but I suggest caution there.   Regardless, you can enjoy the literature map without registering.  Have fun!