Three for Romance, Two for Fun, and One for the Ages

We have some interesting young adult books just in from their publishers.  There are three for romance and adventure, two for fun, and one for the ages.

“Broken Beautiful Hearts” by Kami Garcia was marketed as a young adult novel, but I think it could  be enjoyed by anyone who likes romance with a bit of an edge.  Kami Garcia is well known for putting characters into dramatic and traumatic situations, and she is famous for co-writing the “Beautiful Creatures” and “Dangerous Creatures”  series.  The heroine of this novel has her dreams shattered by an abusive ex-boyfriend.  As she recuperates with relatives, her life might just take an unexpected, romantic turn.

“Nexus,”  by Scott Westerfeld  is a young adult novel from a master storyteller.   The Zeroes are a   group of teens with unusual powers, all born in the year 2000.  Westerfeld, Margo Lanagan, and Deborah Biancotti teamed up to write this series, “Zeroes,” “Swarm,” and finally, “Nexus.”  I don’t know that we need another “teens with superpowers” book, but Westerfeld tells a great story.

Jennifer Castle’s new book, “Together at Midnight,” is a classic great-characters, great-ending romance.
Realistic teen fiction isn’t a genre I really pay attention to, but this novel seems to have heart as characters are drawn together to perform random acts of kindness after witnessing a tragic accident.

“The Adventures of Esther the Wonder Pig,” by Steve Jenkins, is a fun book about a pig  named Esther who is famous in social media. She has a Facebook page and a website, www.estherthewonderpig.com.  Esther was sold as a “teacup” pig but is obviously not teacup size.Because of Esther, Steve and his partner have established “The Happily Ever After Esther Farm Sanctuary” in Campbellville, Ontario.  They rescue abandoned and abused farm animals. 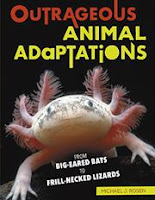 “Outrageous Animal Adaptations: from Big-Eared Bats to Frill-Necked Lizards,”  by Michael J. Rosen is a beautiful, fun book about amazing animals.   Michael J. Rosen wears two hats.  He is both a poet and a children’s author.  One of the animals featured in this book is a favorite of mine, the aye-aye, an unusual kind of lemur with a very long, spindly middle finger that digs grubs out of decaying trees. 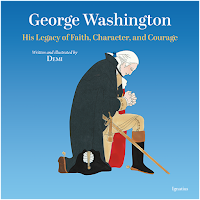 The book that just might become a classic is “George Washington: His Legacy of Faith, Character and Courage,”  by Demi.   Demi’s real name is Charlotte Dumaresq Hunt, but she was given her  nickname, “Demi,” by her father, who said she was half the size of her sister. Her biography of George Washington continues her splendid record of publishing gorgeous books with spiritual themes.
There's something for everyone at Litchfield Public Library!