Game night/D&D is cancelled for tonight.  Sorry for the short notice, but it is due to illness.  Plan to join us next Monday evening at 6:00!
Posted by Litchfield Public Library at 10:26 AM

Email ThisBlogThis!Share to TwitterShare to FacebookShare to Pinterest
Labels: gaming

It’s time for the last children’s programs of 2013.  When I look at the calendar, I know it’s true, but I’m having difficulty believing it. There will be story time on November  29th  for anyone who isn’t out shopping for bargains.  Sometimes we have a large group on the Friday after Thanksgiving, and sometimes it’s a tiny group. But we will still have fun.

December is crazy busy for most of us, and the library is no exception.

December 4, 5, & 6 are regular Toddler Time, Bedtime Story, and Preschool Story Time.  We’ll share one of the new Christmas books that just arrived.  On December 9, I’ll visit the ECFE Santa time with a stack of Christmas books. I’m available to read to children, but it’s even more fun when moms or dads read to their little ones.  On December 10th Darcy Cole will be at the library for Fun with 4-H, from 3-4:30.

December  12 at 3:00 p.m. is our Beginner Book Club.  We will talk about the book, The Best Christmas Pageant Ever   and watch part of the movie that was based on Barbara Robinson’s book.   Several of the children in book club are in the play of the same title that will be presented at the Opera House on Dec. 14 and 15.

In the evening on December 12, Santa will come here to the library.  He will come at 6:00 and stay until  7:30.  Santa promised that he would read a story, sing a song or two, and be available for pictures.  An easy craft and cookies will be available in the meeting room.

Once Upon a Time Story Time, our new preschool story  hour,  happens on   the 2nd Saturday of each month.   On Saturday, December 14, at 10:00, The Gingerbread Boy will be featured. 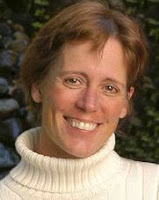 On December 19th, the Intermediate Book Club, “Get Caught Reading,” will meet and discuss books that they like.  Since some avid readers attend this book club,  it could get interesting.

January programs will start with a shazam!   Nancy Carlson, a well-known and well-loved children’s author and illustrator, will visit the library on January 11th at 10:00.   All ages are invited to meet Ms. Carlson, who has visited Litchfield before.

Mark your calendars! Start your engines!  Synchronize  your watches and
e-readers!  Celebrate the holidays at the library!

Congratulations to Jennah Anderson, the winner of the Teen Read Week short story contest! Jennah's short story, "Finally Free" was selected from among 14 entries by a group of outside judges. Her printed story will remain on display for the public until the end of 2013. She receives a $50 gift card to Walmart which was generously donated by the Friends of the Library group (Thank you, Friends!). Jennah is a serious reader and advocate for library programming for teens. She was recently elected by her peers to the office of President of our new Teen Advisory Group. Jennah is a freshman at Litchfield High School. She enjoys reading, drawing, and is an aspiring writer. Her favorite author is Maggie Stiefvater. Way to go, Jennah!

To Be Continued...
Posted by Litchfield Public Library at 12:34 PM

Email ThisBlogThis!Share to TwitterShare to FacebookShare to Pinterest
Labels: teens

Homework help now available at the library on Mondays

We are going to begin offering homework and reading help on Mondays at the library.  A Minnesota Reading Corps tutor who is working in an area elementary school will be available in the Litchfield Library’s children’s area between two and four p.m. on most Mondays beginning in December.  For the kids in Litchfield schools, this will be just a short window after school, but homeschooled students and ACGC students will have a little more time to work with.  Our volunteer is also available at the Grove City public library from ten to noon on Mondays when ACGC isn’t in session.

Students in elementary and middle school are welcome to stop in during this time for practice with reading or help with any kind of homework.  They do not have to be struggling readers; our homework help time is open to anyone.  High school students who need help with reading or writing-related homework can also meet with our tutor, who has taught elementary and middle school in the past.  At this point, we plan for it to be a drop-in program, but we may start signing kids up for particular times if we get a big response.

Minnesota Reading Corps is an AmeriCorps program.  AmeriCorps was founded in 1993 as part of the Corporation for National and Community Service.  It is sometimes called “the domestic Peace Corps”.  According to their website, the volunteers are mostly full-time, and they typically make a service commitment of 10 months to a year.

Minnesota Reading Corps is the largest state AmeriCorps program in the country.  They provide trained literacy tutors to schools for children age three through grade three. Their tutors work in Head Start classrooms, preschools, and elementary schools throughout the state.  The goal is to help students who are just below proficiency in reading become successful readers by the end of third grade.

The Reading Corps follows a research-based program to help kids who are just a little behind in reading skills catch up so that they can be successful in school in the years to come.  We are happy to work with this valuable program to bring their trained tutors into our libraries.
Posted by Litchfield Public Library at 1:27 PM

As I’ve mentioned in the past, as we work on ordering books for our Meeker County libraries, Beth and I use a tool called standing orders. These are lists of authors and series that we can choose to receive automatically in the next year. I have many authors that are predictable and that I would purchase. Think of a writer/illustrator like Eric Carle. His books have that “Eric Carle” look, are bright, cheerful, and sure to be a hit with younger children. He never fails to bring out wonderful books, but he never surprises me with a full length novel. 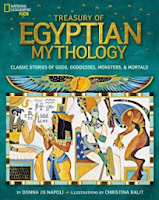 When I think of Donna Jo Napoli, I think of her retelling of fairy tales, like Beast or her version of Cinderella, set in China, Bound. Ms. Napoli does an extensive amount of research for her novels, so it isn’t surprising that she would write Treasury of Egyptian Mythology. This beautiful book follows her impressive Treasury of Greek Mythology. Egyptian mythology is loaded with colorful images and information about little-known major and minor deities.

Another standing-order author, Alexander McCall Smith, has begun to write Precious Ramotswe Mysteries for young readers. I haven’t read the whole “No. 1 Ladies Detective” series, but I  am a big fan of Precious Ramotswe. The first book in the children's series,The Great Cake Mystery, introduces Precious. The second book, The Mystery of Meerkat Hill, tells the story of how Precious used her detective skills and found her family’s cow.

Jenny Nimmo, another well-known, standing-order author, has continued her “Chronicles of the Red King” series with  Leopard’s Gold . Leopard’s Gold features the nine children of King Timoken and is a fantastic family drama, full of fantasy, magical siblings and friends, and a spectacular story line. 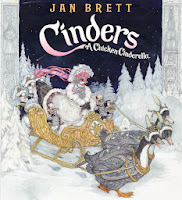 Jan Brett is a favorite of mine. The cover of her new book, Cinders: a Chicken Cinderella, features an ornately dressed chicken in a sleigh pulled by large ducks, driven by mice footmen. Ms. Brett visited St. Petersburg, Russia and was inspired by the architecture and the snowy landscape for this retelling of a favorite fairy tale. The fold out page of the hens and roosters dancing at the ball would make a beautiful poster, if you really like chickens. The real chickens who inspired the characters are Edwina and Elof, who are both beautiful Phoenix chickens.

Finally, fans of the “Ranger’s Apprentice” series have been waiting for book 12, The Royal Ranger. John Flanagan is another author on the standing order list. This is the final book in the series. It’s time for Will Treaty, who has become the finest Ranger in the land, to take on an apprentice. His companion series, The Brotherband Chronicles will continue with the fourth book coming out next year. Could Will’s apprentice begin a new series of adventures? Time will tell. See you at the library!

We will be closed on Monday, November 11, for Veterans Day.

Because of this, there will be no gaming night next week.
Posted by Litchfield Public Library at 9:48 AM

Email ThisBlogThis!Share to TwitterShare to FacebookShare to Pinterest
Labels: holidays

Thanking Them for Their Service

Our library will be closed on Monday, November 11, to observe Veterans Day.  This seems a good time to highlight some of the recent books about American veterans that we have available.

Thank You for Your Service is an account of the impact of war on veterans after they return home.  Pulitzer Prize-winning journalist David Finkel followed some of the soldiers from the unit with which he was embedded during the Iraq surge.  He describes the struggles and suffering they and their families experience after they go back to civilian life.  Finkel asks and answers questions about what we ask of the men and women who go to war, and what we thank them for when they return.

Minnesota native Lt. Col. Mark Weber wrote a collection of letters to his sons when he was diagnosed with terminal cancer.  Tell My Sons: A Father’s Last Letters is full of Weber’s stories about courage, words and actions, humility, and humor.  Robin Williams wrote the foreword, and notable people have praised the book, from author Mitch Albom to the Iraqi Chief of Defense, General Zibari.  Weber died in June.

For a great World War II survival story, pick up The Secret Rescue: An Untold Story of American Nurses and Medics Behind Nazi Lines.  Author Cate Lineberry researched a story kept secret until 1990 when communism ended in Albania and the people involved finally felt they could safely tell it.  A medical air evacuation flight crash-landed in Nazi-occupied Albania.  Most of the thirty surviving Americans walked over 600 miles, aided by locals, before they were rescued 62 days later.  A few who were separated from the group waited twice as long to get out.

Another of the books we have on World War II includes the experience of a local resident, Wanda Nordlie.  Wanda, Lieutenant Thoen at the time, was an army nurse who helped to liberate the concentration camp at Ebensee, Austria.  The book Inside the Gates by Dr. Richard MacDonald tells the previously untold story.

The veterans of World War I were typically ignored once World War II happened.  In the book The Last of the Doughboys: The Forgotten Generation and Their Forgotten World War, we can read about the surviving WWI veterans that author Richard Rubin found, beginning in 2003.  Between the ages of 101 and 113 when he interviewed them, all are now gone.  The book is a tribute to these veterans, as well as a collection of fascinating stories.  Expect to see more attention paid to World War I as we approach the 100th anniversary next year.

There is so much to learn about the experiences generations of veterans have had in war and peacetime.  We thank them for their service to our country.
Posted by Litchfield Public Library at 3:11 PM