It’s time to catch our breath before the New Year comes.  This is the week between.  I start noticing the change in light just after New Year’s, because I’m really sensitive to Seasonal Affective Disorder.  In the jungle that is our middle room, a tree is yearning and stretching toward the south.  Four orchids are getting ready to burst into bloom, and the asparagus fern is sending out long, long shoots.  One points south, and the confused one points west.  I wonder if it is drawn toward our SAD light.  Anyway, they know that more light will come our way, even if the cold is bitter. 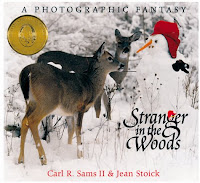 Two  gentle picture books come to my mind when I think about this time of year.  One is “Stranger in the Woods” by Carl R. Sams and Jean Stoick.  Mr. Sams and Ms. Stoick  set up a snowman in the woods, took stunning photographs of wildlife interacting with it, and turned it all into a lovely picture book. Their books have won more than 80 awards for their books.   I recommend that you sit in a cozy chair with a cup of something warm to drink, preferably with a child or cat in your lap, and absorb the beauty of these photographs. 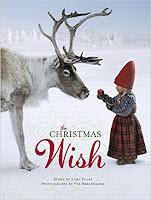 Another book, “The Christmas Wish,” by Lori Evert and Per Breiehagen, has stunning photographs of their   4 year old daughter Anja wearing traditional Norwegian clothing and Sami reindeer shoes, interacting with Arctic animals.  They have since developed a line of “Wish” books and products, but this first book is simply amazing.  I believe its title in Norway was “The Christmas Dream.”

There is just something magical about snowy woods.  One of my favorite parenting memories is of taking our daughter and two of her friends out to Youngstrom Woods during a rare January thaw.  The girls were sure they were lost, but I could always hear them.  The stillness of the woods was breathtaking, even with the giggling girls traipsing through the snow.

I was watching a science fiction show from the Star Trek family, and smiled as the brash Earthling chided the older, wiser alien, Captain Drennig, about his culture not visiting planet Earth.  “I’m surprised your ancestors never made it to Earth.”  “We don’t believe in travelling great distances.  There’s far too much to see close to home.”    Like the fictional Captain Drennig, I find wonder in our own back yard.  Catch your breath, put on some quiet music, and enjoy hearing Nature breathe in an out as one year closes and another year starts.  Happy New Year!

Readin' Around the Christmas Tree

A new nonfiction book from Oxford University Press, Christmas in the Crosshairs: Two Thousand Years of Denouncing and Defending the World’s Most Celebrated Holiday, examines whether there is or ever has been a war on Christmas.  Historian Gerry Bowler specializes in the intersection of religion and popular culture.  He demonstrates that throughout history, beginning with the holiday’s controversial invention during the Roman Empire, Christmas has inspired debate and conflict.  Involving Puritans, Bolsheviks, Hitler, and Charles Dickens, this book can give you some historical perspective on the issue.

You can’t tell from looking at the cover, but Mercedes Lackey’s newest novel, A Scandal in Battersea, is a Christmas story.  This is the twelfth book in Lackey’s Elemental Masters series about Sherlock Holmes in an alternate, magical England.  John and Mary Watson, both Elemental Masters, are celebrating Christmas when they are asked to investigate the reappearance of missing women, all of whom have been driven mad by whatever happened after they disappeared.

For something gentler, Melody Carlson’s The Christmas Blessing may fit the bill.  Carlson is a bestselling author of Christian fiction, including many Christmas novels.  In The Christmas Blessing, Amelia despairs when the father of her baby is shot down in the South Pacific in 1944.  Without a job or money, she must decide whether to go to his high-class parents, who don’t know about her or the baby.

Debbie Macomber is another bestselling author known for her clean and gentle novels, including popular Christmas books.  Merry and Bright is her newest.  Merry Knight takes care of her mother who has multiple sclerosis and her brother who has Down syndrome, when she isn’t working overtime.  But her family is concerned she doesn’t have a social life and they set up an online dating profile for her.  She hits it off online with someone, only to be shocked when they meet in person.

Elin Hilderbrand’s Winter Trilogy has just gotten a fourth book, Winter Solstice.  (Does that make it a quartet?)  The Quinn family is gathered for the first time in a long time to celebrate the holidays at the Winter Street Inn on Nantucket Island.  Many of their difficulties have been resolved, but their patriarch is dying of cancer.  Hilderbrand is good at writing characters; those who enjoy bittersweet family stories are likely to enjoy this farewell to the series.

Other new Christmas books for adults include How the Finch Stole Christmas by Donna Andrews, Fatal Frost by Karen MacInerney, Last Christmas in Paris by Hazel Gaynor and Heather Webb, Sugar Pine Trail by RaeAnne Thayne, and The Amish Christmas Candle by Kelly Long, Jennifer Beckstrand, and Lisa Jones Baker. 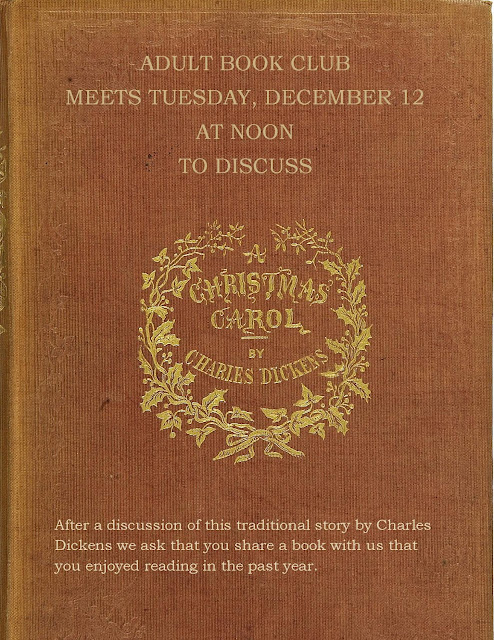 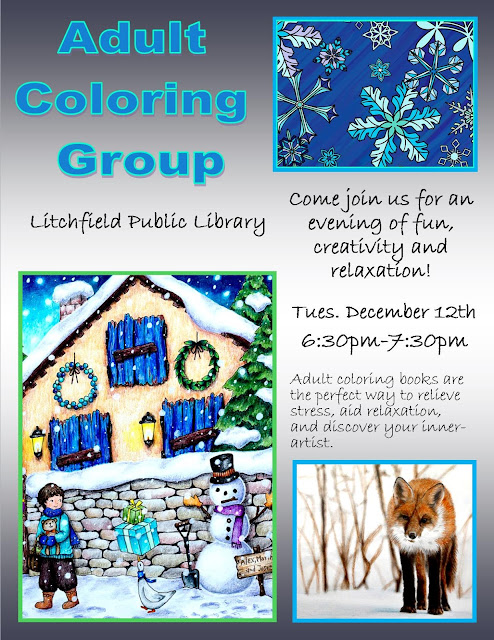 Did you know that you can visit our library blog at http://litchlibrary.blogspot.com/ and read past blog entries that the library has posted?  Why do I know this?  Because I was looking back at my older essays to get some thoughts about this middle week in December.  It isn’t Christmas yet, it’s too soon for January announcements, and the paper comes out on the 13th.  This really doesn’t matter unless you are superstitious and it isn’t a Friday the 13th, anyway.

One of the blog entries was about books I was reading.  What vanity to think people might be interested in that!  But it’s so interesting!   I think we’ll try that again. 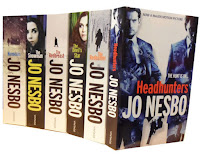 Lately I’ve been reading Norwegian author Jo Nesbo, a suggestion from several patrons. I’ve read “The Bat,” “Cockroaches,”  “Redbreast” and “Nemesis” and now will move on to “The Devil’s Star.”  I read these pretty slowly and enjoy them immensely. Like the Swedish crime novels I’ve read, the atmosphere in these Norwegian novels is dark and wintry. The main character, Harry Hole, is flawed but he gets things right in the end.

I really enjoyed a young adult book published in Canada, “The Marrow Thieves,” by Cherie Dimaline.  This novel is set in Canada after global warming has ravaged the earth.  Human beings have been driven mad because they have lost the ability to dream.  The only cure is found in the bone marrow of indigenous people.  Many people don’t know about their tribe of origin, but they are still being hunted.  Intrigue, betrayal, love, friendship and failure all enter in to this tremendous book. 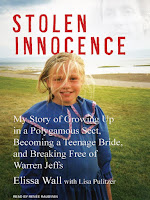 I think I enjoyed “Stolen Innocence,”  by Elissa Wall, but the subject was her escape from a polygamist sect in the Southwest and I found it difficult to read about her situation.  I admire her honesty and courage in writing about her painful family life.

I did enjoy “The Inner Life of Cats,” by Thomas McNamee.  For a good time, read reviews of this book at amazon.com.  They range from “Even dog lovers should read this book” to “Still awake? This should take care of that.”  Of course we all know that our fur babies are the best in the world, but McNamee writes beautifully and poignantly about the things he learned from Augusta, his cat who was the best cat in the world, to him.

“No Apparent Distress,” by Rachel Pearson is a timely look at her development as a doctor.  She spent years taking care of patients who were poor and indigent.  This might have resonated so much with me because I’ve been navigating the insurance system as an almost 65 year old person having to sometimes pay full price for insulin because my insurance doesn’t cover it.

Finally, I need to mention "A Life of Triumph: How a Girl With Cerebral Palsy Beat the Odds to Achieve Success."  This book was written by Litchfield's own Duane Hickler.  He halped Karen A. Gorr write her memoir about growing up with cerebral palsy and living in an institution during her early years.  Karen eventually got her education and taught at the high school level for 20 years.  She married, became a mother, and has been a successful advocate for people with mental and phyusical disabilities.  I read the book on my Kindle. Unlike most of the books I mention, the library doesn't own this book, but it's easy to find at amazon.com.
Posted by Litchfield Public Library at 4:37 PM