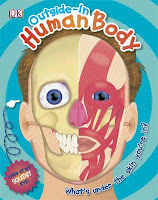 It’s too late for Halloween, but a most disturbing book sits on my desk.  A protruding eyeball seems to stare directly at me from the clear cover of one of the more interesting anatomy books we’ve added to the children’s collection.  “Outside-In Human Body” answers the question, “What’s under the skin you’re in?” Author Clive Gifford and illustrator Mark Ruffle have produced a colorful, information-packed book that looks at the human body from the hair and skin to the muscles, bones, and internal organs. 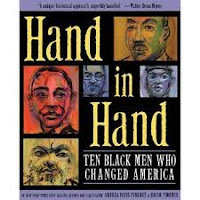 “Andrea Davis Pinkney is an author and Coretta Scott King Award-winner who strives to create books geared toward children that display pride in the African-American culture and its achievements.”  This description of Ms. Pinkney is from her amazon.com author page. Ms. Pinkney is married to illustrator Brian Pinkney, who often illustrates her books. Their new collaboration, “Hand in Hand: Ten Black Men Who Changed America” is a beautiful book that gives
information with a poetic and personal touch.  The 10th person profiled in Ms. Pinkney’s book is President Barack Obama.   Some of the heroes chosen by Ms. Pinkney are well known, such as Frederick Douglass and Martin Luther King, Jr.  Others are not so well known, such as Benjamin Banneker, an astronomer in Colonial times.  This one is definitely worth reading. 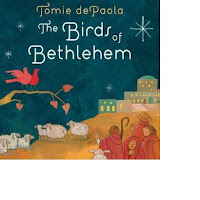 There are many ways to tell the Christmas story.  We have versions of the Nativity told from the point of view of animals, shepherds, and magi, to name a few.   Tomie de Paola has written and illustrated “The Birds of Bethlehem,” which tells the story from a “birds’- eye view.” Do birds really talk?   Tomie de Paola will make you believe that they might.  He has been designated a living treasure by the state of New Hampshire, where he makes his home. I agree with the state of NH, and hope that Mr. dePaola, who just turned 78, will continue to write and illustrate children’s books for years to come. 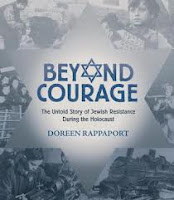 Doreen Rappaport is a recipient of the Washington Post-Children’s Book Guild lifetime achievement award for the writing of nonfiction.  Her newest book, “Beyond Courage, the Untold Story of Jewish Resistance During the Holocaust,” took more than six years to write.  She says of her book, “How Jews organized themselves in order to survive and defy their enemy is an important but still neglected piece of history.  I present a sampling of actions, efforts, and heroism with the hope that I can play a role in helping to correct the damaging and persistent belief that Jews ‘went like sheep to the slaughter.’”

Ms. Rappaport looks at the horrors of the Holocaust without flinching.  Knowing the truth of each story and that some of the individuals survived to build new lives after the war gives a sense of hope to this important book.  If it doesn’t win a book award, I think I’ll start a “Jan’s medal for extreme excellence in children’s literature” and nominate this book to be the first recipient.

These wonderful books are waiting for you at Litchfield Library – I hope to see you there!