How Does a Zombie Know if it's a Bad Hair Day?

Have you noticed a progression in paranormal movies, books and television shows from witches and ghosts to vampires and vampire slayers, werewolves, shape shifters, demonic creatures and finally, zombies?  Is this a logical progression?  No matter, Darren Shan has started a new series, “Zom-B Underground.”   He introduces Becky Smith, a tomboy who is nicknamed “B,” who is trying to survive after being “revitalized.”   More than 25 million copies of his novels have been sold. He is famous for his series, “Cirque du Freak,” “ Demonata,” and “The Saga of Larten Crepsley.” .”  Mr. Shan’s novels are available all over the world, in 31 languages.  More than 25 million copies of his novels have been sold, and he is described as a bestselling master of horror.  So, if Mr. Shan decides it’s time for a young adult novel about zombies, he must be right.

Gordon Korman is known for suspenseful books like “Island,” “Everest,” “Dive,” “Kidnapped,” and “Titanic,” all trilogies.  He has also written a series of juvenile books about Griffin Bing and his friends, “Swindle,” Zoobreak,” “Framed,” and “Showoff.”  The fifth book is “Hideout,” in which the friends try to hide a huge Doberman Pincher that weighs about 150 pounds.   As the flap on the book cover says, “Six kids. Three hideouts.  One extremely large dog.  What could possibly go wrong?”

Barbara O’Connor, who wrote the book, “How to Steal a Dog,” has written another novel about young people working together to save an animal.  This time, it’s a one-legged homing pigeon named Sherman, belonging to Mr. Mineo, which is on the lam.   His   eight days of freedom bring together several residents of the little town of Meadville.  The book is titled, “On the Road to Mr. Mineo’s.” 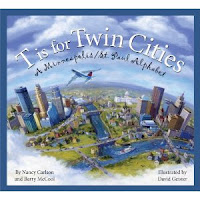 “T is for Twin Cities” is Nancy Carlson’s newest book.  This is an alphabet book about Minneapolis/St. Paul.  Her co-writer, Helen L. Wilbur is a former librarian.  I suspect that many of the interesting historical tidbits come out of her vast experience.  By the way, “Z” is for zero degrees.  Nancy and Helen say “It’s cold outside but we don’t care, in warm boots and hats and long underwear!” 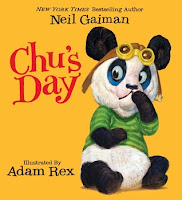 All of the coughing, sneezing and drippy noses this winter make Neil Gaiman’s new book, “Chu’s Day,” especially timely.  This is a picture book about a baby giant panda who sneezes.  Mr. Gaiman’s website, www.mousecircus.com, features a trailer about this, his newest  book.   He talks about the experience of visiting China and holding a baby giant panda in his lap while it ate bamboo.  He says that at this time he’s perhaps proudest of this, his shortest book.  I absolutely love “Chu’s Day”  and there’s nothing to add to that. 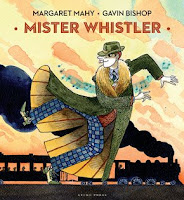 Sadly, beloved children’s author Margaret Mahy passed away in 2012, at the age of 76.    One of her last books, published posthumously, is “Mister Whistler.”   Ms. Mahy lived in New Zealand, but was famous throughout the world.  “Mister Whistler” tells the story of an eccentric gentleman who always has a song in his head and whose feet just have to dance.  I hope you have a song in your head, joy in your heart and that you dance a little bit every day.  See you at the library!