Cuddle up and watch a movie

Happy Valentine’s Day!  Do you go out with your sweetheart to celebrate this holiday, or do you avoid the crowds and stay in?  Or are you single and avoiding the holiday completely?  You can go out to the library first to stock up with DVDs to stay in for the evening.  A number of recent movies we have in the collection might be the entertainment you’re looking for tonight; these are all currently nominated for Oscars.

Guardians of the Galaxy Vol. 2 is a funny sci-fi action movie, the sequel to “Guardians of the Galaxy” from 2014.  The team from the first movie, which includes a talking raccoon and a tree-like creature, travels through space as they try to find the identity of Peter Quill’s father.  I would say it doesn’t reach the level of inventive humor that the first movie did, but it’s still entertaining.  Marvel movies rarely disappoint as long as you like superheroes.

Kong: Skull Island is another sci-fi action movie, but with less humor, although it’s still fluff.  This is a King Kong origin story, featuring a team of explorers dropped onto a remote island in the early ‘70s.  The monster-movie plot may be a little silly, but the cinematography is quite beautiful.  The cast is strong, as well, with Tom Hiddleston, Samuel L. Jackson, John Goodman, Brie Larson, and John C. Reilly in the group.

Dunkirk is one of the big movies of the year, nominated for eight Oscars.  Christopher Nolan, who is known for the Dark Knight trilogy, Interstellar, and Inception, wrote and directed the film. This one is about the evacuation of Allied troops from the French city of Dunkirk during World War II.  Because it’s nonlinear and without dialogue for stretches of the movie, it’s not everyone’s idea of a great war film, but it’s art.

Moving away from all the action movies, Victoria and Abdul is a gentle British movie.  Judi Dench stars as an elderly Queen Victoria, who strikes up an unlikely friendship with a young Indian clerk named Abdul Karim.  The Queen is feeling restricted in her position, and the alliance the two of them form allows the queen to see the world in a new way.  The friendship apparently really happened, but the movie seems to have taken some artistic license to tell a good story.

An animated movie for adults, Loving Vincent is a biography of Vincent van Gogh through his paintings.  In this first feature-length film created through oil-painted animation, a young man attempts to deliver van Gogh’s final letter and ends up learning about the artist’s final days.  The paintings and the characters that inhabit them tell the stories.

I didn’t include any romances, did I?  We have those at the library, too, but we’re not really in an age of great romantic comedies or epic love stories, so you may have to look for something older.  To be honest, my husband and I rarely watch romantic movies together; we just look for something we both enjoy, like sci fi/fantasy or a funny TV series.

While you’re at the library, take a chance on our Blind Date with a Book display near the front desk.  Each gift-wrapped book has a very brief description on the label, but you don’t see what you get until you check it out.  I hope you’ll find a book or movie to love this month! 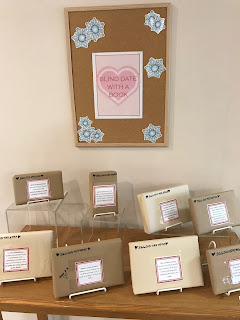