A Peek at my Reading List, or What Was I Thinking?

Do you ever look back at your reading list and wonder why on earth that title appealed to you?  Well, if you look at my recent reading list, you will definitely wonder, “why?”

I often read fantasy, but this spring I made a foray into horror.  While poking around some website or other, I ran into the movie, “Let Me In,” a creepy Scandinavian vampire movie.  There is also a remake titled “Let the Right One In.”  The book these movies were based on also has two titles: “Let the Right One In” and “Let Me In.”  If I have it sorted out correctly, he published his book with the title “Let the Right One in.”  Then it was called “Let Me In” for the Swedish movie.   Then the book was called “Let Me In,” but the American movie was titled Let the Right One In.  I might have it backwards.  After all of this confusion,  it seemed like a good idea to read the book.  It was interesting to read a vampire story written by a Swedish author.  His name is John Ajvide Lindqvist and he specializes in horror novels and short stories.

My next journey into reading horror novels was the Golgotha series,   “Six-Gun Tarot,”  and“Shotgun Arcana,” and “Queen of Swords.”," all written by R.S. Belcher.    I don’t know how to describe this  series.  Steam punk Western horror comes to mind.  Each book expands the characters and stories introduced in the first book. 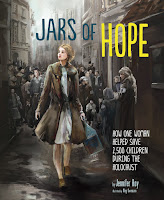 Of course after that series, I needed to cleanse my palate, so to speak.  I read “Jars of Hope,” the story of Irena Sendler, written by Jennifer Roy.  Ms. Roy’s aunt was a Holocaust survivor whose story is told in “Yellow Star,” also written by Jennifer Roy.   Irena saved 2500 children from the Nazis and kept careful records of each child, buried in jars in a friend’s garden.  Most of the children, however, lost their entire families and were never reunited with their loved ones.  We read this book for Beginner’s Book Club.

I stayed in the realm of nonfiction for another book, “Educated: a Memoir,” written by Tara Westover.  I thoroughly enjoyed this book.  Tara was born into a family of survivalists who lived up in the mountains of Idaho.  She wasn’t even homeschooled.  She simply didn’t go to school.  Her   family ran a junk yard and survived a series of accidents, injuries which usually went without medical care. Tara taught herself enough math, history, science and language to successfully take the ACT test.  She started at Brigham Young University, where she was exposed for the first time to issues like the world wars, the Holocaust, civil rights, etc.  She went on to Harvard and eventually earned a PhD in history in 2014. Her book is somewhat controversial because her family members have different memories of their younger years.

Finally, I went back to the horror genre.  I don’t know why.  I read “The Final Winter: an Apocalyptic Horror Novel,” by Iain Rob Wright.  This chilling (pun intended) book presents a small group of survivors trapped in an English pub during a horrific snowstorm.  Is it really the end of all things?  This book reminds me of some other things I’ve read and seen, especially by Stephen King, and it needs a ruthless editor.  But I finished it.    This last book is available on Kindle as a free book.  We probably won’t add it to the collection.  See you at the library!