The luck of the Irish author (and musician) 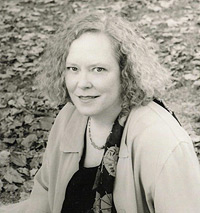 Join us for a St. Patrick’s Day celebration on Thursday, March 14, when Erin Hart and Paddy O’Brien visit the Litchfield Library.  At 7 p.m., Erin will talk about her books and Paddy will play traditional Irish music.  The event is free, supported by Minnesota Library Legacy funding.  We’d love to know if you’re coming so that we can plan for space, but you don’t need to sign up to attend.

Erin Hart is a fiction author from Minnesota.  She grew up in Rochester and attended St. Olaf and the University of Minnesota.  She started out in theater, then moved into freelance journalism, covering the arts.  She was the theater critic for Minnesota Public Radio for several years in the 1990s, and her work was published in the Pioneer Press and Star Tribune, among other regional papers.

Erin’s debut novel was Haunted Ground, the first in her Nora Gavin/Cormac Maguire series.  The series is sometimes described as crime fiction and sometimes as mystery.  The books are set in Ireland, with elements of archaeology, forensics, history, traditional music, and folklore.  The original inspiration for the first book came from a true story Erin heard while visiting Ireland, about the severed head of a beautiful red-haired girl, found perfectly preserved in a bog.

Haunted Ground was nominated for an Agatha award and an Anthony award, both of which are for mysteries.  It won the Romantic Times Best First Mystery award and a Friends of American Writers Award.

The second novel in the series is Lake of Sorrows, which was a finalist for a Minnesota Book Award.  The third, False Mermaid, was named one of the top ten crime novels of 2010 by the American Library Association’s Booklist magazine.  The first three books are available to be checked out at our library.

The Book of Killowen, the fourth in the series, will be released March 5th.  Publishers Weekly gave it a starred review, saying it “combines powerful insights into human nature and pristine prose… [and] offers food for thought that persists beyond the immediate thrill of a well-told tale.”  Erin will have copies of her book available to buy, and she will be available to sign them.

Erin’s husband, Paddy O’Brien, is an expert on Irish traditional music, both as a scholar and performer.  A native of County Offaly in Ireland, he moved to the United States in the 1980s.  He performs on the two-row button accordion.  He is known for his massive repertoire of over 3000 songs, all stored in his head.  He was All-Ireland senior accordion champion in 1975.  In 2010 he was presented with the Lifetime Achievement Award for contributions to Irish music and culture in Minnesota by the Irish Music and Dance Association.

Paddy has a new book out as well: The Road from Castlebarnagh: Growing Up in Irish Music, a memoir.  It was published in Ireland in November, and it will be distributed in the U.S. soon.  Paddy will have copies available for sale at our event.

I hope you will join us in our St. Patrick’s Day celebration, whether you’re Irish or not.  As they say, there are only two kinds of people in the world: the Irish and those who wish they were.
Posted by Litchfield Public Library at 3:55 PM