Commemorating the 100th anniversary of WWI

This month marks the 100th anniversary of the First World War.  Archduke Franz Ferdinand was assassinated on June 28, 1914. A month later, Austria-Hungary declared war on Serbia.  In the first days of August, Germany declared war on Russia, France, and Belgium.  On August 4, Germany invaded Belgium, beginning the war itself, which would last over four years.

We will be seeing commemorations of the Great War, as it was first known, over the next few years, especially once we get to 2017, the 100th anniversary of the United States’ involvement in the war.  Most people know far less about World War I than World War II.  Following are some of the recent books we have on World War I that can help fill in your knowledge of this era that truly changed the world.  Many of them focus on the events that happened at the beginning of the war, exactly 100 years ago.

We have three books published in 2013 that analyze the causes of the war and the events leading up to its beginning.  Catastrophe 1914: Europe Goes to War tells the story of the outbreak of the war, from the breakdown in diplomacy to the end of 1914.  British historian Max Hastings makes the case that Germany and Austria-Hungary were mostly to blame, and he argues against the typical judgment that the war was pointless, making the case that Germany had to be defeated for the sake of the freedom of Europe.

In July 1914: Countdown to War, author Sean McMeekin takes a different, more controversial perspective.  He argues that a small group of statesmen in Russia and France, in addition to Germany and Austria-Hungary, sought to start the war.  He bases his case on gaps in documentation that suggest that important players in these countries destroyed and doctored evidence, and on surviving correspondence in which these politicians blame their opponents for starting the war.

The Sleepwalkers: How Europe Went to War in 1914 is yet another analysis of the causes of the war.  Author Christopher Clark starts the book with a thorough explanation of the European, especially Balkan, politics that set the scene for the war to begin.  The rest of the book is a scholarly analysis of the beginnings of the conflict, with Clark carefully avoiding placing the blame on any countries or individuals.

The Long Shadow: The Legacies of the Great War in the Twentieth Century was just published in the U.S. in May.  It was written by a University of Cambridge historian, David Reynolds, and it won the 2014 PEN Hessell-Tiltman Prize, a British award for the best work of history.  Reynolds argues that we are still struggling to understand the First World War.  He analyzes the impact of the war on the period between world wars and after World War II, showing that global attitudes and ideas changed significantly because of it. 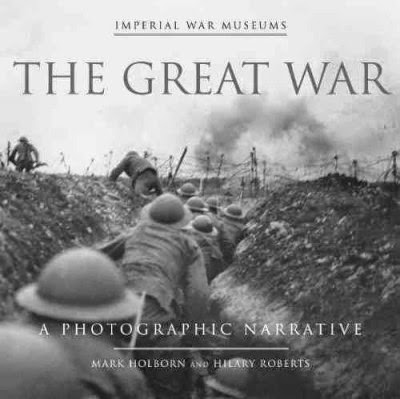 The Great War: A Photographic Narrative is probably the best anthology of World War I photographs ever printed.  The photos come from the collections of the Imperial War Museum in London, curated by Hilary Roberts.  The book is organized by year, showing the history of the war from the arms race to the armistice, through 305 photographs.

Look for more books and media coverage on World War I in the next few years that will cover many aspects of the war as it unfolded.  Understanding history is important to understanding the world we live in now.
Posted by Litchfield Public Library at 11:20 AM