The end of an era

Downton Abbey fans, can you believe the series is almost over?  The high-class BBC soap opera is just about to begin its sixth and final season.  Every year when a new season begins, I  see people discover it for the first time and come to the library to check out the previous seasons.  Our library has seasons one through five on DVD and will be getting season six when it’s released later in the month. 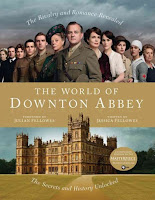 For those who would like some more background on the show, we have the DVD The Manners of Downton Abbey, a PBS documentary on the customs of the British aristocracy in the early twentieth century.  We also have two books:  The World of Downton Abbey and The Chronicles of Downton Abbey, which give details about the characters as well as the time and place.  These books came out after the first and second seasons, and they have gorgeous photos.

For the true stories that inspired the show, read Lady Almina and the Real Downton Abbey: The Lost Legacy of Highclere Castle and Below Stairs: The Classic Kitchen Maid’s Memoir That Inspired ‘Upstairs, Downstairs’ and ‘Downton Abbey’.  Lady Almina was written by the Countess of Carnarvon, the current lady of the house where Downton Abbey is filmed.  Lady Almina was an inspiration for the character Cora in the TV series, the daughter of an industrialist whose dowry saved the ancestral home and who opened the house to wounded soldiers during World War I.

Below Stairs is a memoir written by Margaret Powell, who worked as a kitchen maid in a great house in 1920s England.  Downton creator Julian Fellowes credits the book, published in 1968, for introducing him to the world of the servants who worked hard from dawn to well after dark to maintain the perfect world of the upper class.  Powell also wrote Servants’ Hall: A Real Life Upstairs, Downstairs Romance.  This sequel tells the story of an under-parlormaid who eloped with the aristocratic family’s only son.

Many novels also cover this territory of titled, wealthy people in England in the Edwardian era.  The Love & Inheritance trilogy by Fay Weldon fits that mold.  The first book is Habits of the House, followed by Long Live the King and The New Countess.  Weldon wrote the pilot for the original Upstairs, Downstairs television series.  The series begins with the story of a family who must arrange a marriage for their son to a wealthy American socialite in order to save their estate.  There’s an orphaned niece, King Edward’s coronation, heirs to be produced and properly raised, the threat of a scandalous book by a family member, and all sorts of witty, frivolous goings-on.

For a classic novel about Lady Cora’s situation in life, we have Edith Wharton’s The Buccaneers. This was Wharton’s last novel, left unfinished at the time of her death and completed according to her plans by another author.  The novel tells the story of several new-money American girls who go to England in search of titled husbands, who need the girls’ money to support family estates.  Litchfield Library also has the BBC miniseries.

A few other good choices for staying in the Downton spirit: Jeeves and the Wedding Bells by Sebastian Faulks; The American Heiress and The Fortune Hunter by Daisy Goodwin; and The Last Summer by Judith Klinghorn.

All good things must end, and it seems better to me that Downton end now on a good note than descend into more and more preposterous storylines.  Enjoy the ending, my fellow fans!
Posted by Litchfield Public Library at 3:59 PM