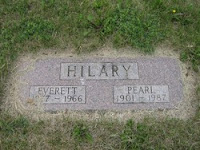 My Grandpa Hilary built houses, roofed barns, wired farms for electricity, and made simple furniture, mostly dressers and wooden chests.  In his later years he made little birdhouses that looked like outhouses, but that’s another story.  The furniture “Pop” made was plain but very functional.  My mom had 3 dressers that he made; I have two dressers and a small chest.  My brother and I each received birdhouse/outhouses when we were children.  These are all priceless.  Not valuable, but priceless. 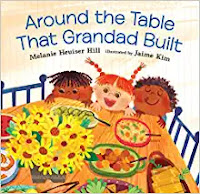 One of our new children’s books reminds me of family treasures.  Melanie Heuiser Hill has written a cumulative tale (think, “This is the House that Jack Built”) titled “Around the Table that Grandad Built.”  Everything on or around the table evokes a memory, from the glasses that were a wedding gift to the sunflowers from the garden.  I like this book because it is a Thanksgiving story, but doesn’t perpetuate the popular but inaccurate myths about the holiday. 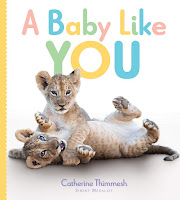 Is there anything cuter than baby humans or baby animals?  “A Baby like You,” by Catherine Thimmesh, celebrates the cutest of the cute.  We read this one at Toddler Time, and the little ones loved it.  We are enjoying a four-month-old kitten at our house, and he has breathed in new life into the life of the three humans, tiny dog, and 18-year-old cat that share our home.   Gracie the dog isn’t so sure, even if the kitten is cute. If you ask people who don’t like cats why they don’t like them, sometimes the response is “Because they aren’t like dogs.”  Mike Boldt has written and illustrated a book, “Bad Dog,” about a girl who wants a dog but gets a cat for her birthday.  She insists that her pet, Rocky, is a dog. But Rocky doesn’t come when she’s called.  She hates her leash.  Rocky doesn’t like other dogs and she won’t play fetch. This book is a funny look at the differences between cats and dogs. 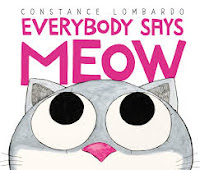 My friend Carole Wendt visited story time January 24th, to read stories with me “reader’s theater” style.  We read the new book by Constance Lombardo, “Everybody Says Meow.”  The characters in
the story, all cats to begin with, are joined by a dog, a frog, and a duck that refuse to follow a simple direction: “Let’s all say meow.” 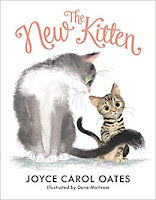 Finally, there is a new book that directly addresses the situation at my house, “The New Kitten,” by Joyce Carol Oates.  Yes, that Joyce Carol Oates who is a famous writer.  She loves cats.  This picture book tells the story of Cherie, a beautiful cat who is used to being an only kitty.  Her owners bring home a kitten named Cleopatra, and sibling rivalry breaks loose.  Our Gizmo looks like a fuzzy version of Cleopatra, and he also can’t resist a tail on an old cat.

Whether you are interested in family treasures, cute baby animals, or interesting cats, you will find something to read at Litchfield Public library.  See you there!